THE BBC has unveiled plans for a programme where people make soup in a tent.

Dubbed ‘the nation’s soupiest show’, The Great British Soup-Off gives contestants an array of vegetables and a blender then challenges them to make mind-blowing soup.

A BBC spokesman said: “Soup is all things to all men, it’s a meal and a drink at once. Everyone has their favourite soup, usually it’s tomato but sometimes it might be mushroom or onion.

“We’re expecting exciting vegetable combinations and maybe some garnish on top. There are so many creative directions with soup, for example it can be runny or thick with chunks of stuff in it.

“But one thing’s for sure – with the title of ‘Britain’s best soup maker’ at stake, emotions are sure to run high.”

Meanwhile Channel 4 has bought all rights to cake, meaning that anyone ‘combining eggs, milk and flour in a cake-style recipe’ is potentially open to legal action. 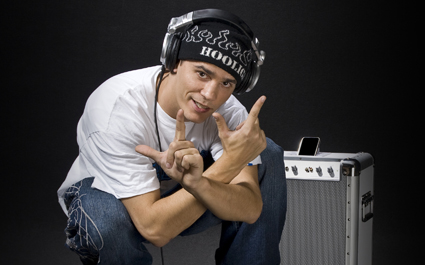 A 33-YEAR-OLD man has been revealed as the world’s lowest-paid DJ.

Tom Booker, from Reading, commands a fee of £4 to play ‘house, disco and a twist of classic garage’ in the function room of his local pub on alternate Fridays.

Booker, who DJs under the name of ‘Daddy T’, does not get a single free drink or snack and has to pay for his own taxi home.

He said: “I’d describe my lifestyle as extremely frugal. I’m on the dole so all my DJ work is cash-in-hand, although as there is so little cash going into my hand the benefits people don’t care about it, in fact they pity me.”

Booker’s night ‘Funky Friday’ attracts crowds of up to 14, consisting mainly of people who are walking through the room to find the toilet.

Booker added: “My DJing style is to take the dance floor on a music journey that begins with some killer 90s hip hop and then building the vibe through progressive house and trance to some timeless club anthems. Not that anybody gives a shit, they just want a late drink and to hassle me for Mysterious Girl by Peter Andre.

“I had dreams once.”

Landlord Wayne Hayes said: “DJ Daddy T is an example of how hard work and dedication can get you absolutely nowhere.”