APPLE is taking on game-and-watch giant Casio, it has been emerged.

The corporation’s long-rumoured iGame-and-watch will combine a digital timepiece with a rudimentary game involving rockets.

An Apple spokesman said: “For too long Casio has dominated the lucrative game-and-watch market.

“Well, it’s time for them to move over and let the big dog eat.

“Wait until they see the iGame-and-Watch with its elementary rocket game, which is called Rocket Shoot, and natty black plastic strap.

“Plus it’s got a calculator on it.”

Apple fan Julian Cook said: “Will it have a picture of an apple on it? OK, I’m in.”

However sales manager Julian Cook said: “It’d have to be a pretty great product to make me switch from my existing game-and-watch on which I can play a golf game.

“Besides being fun, it allows me to sharpen up my putting skills.”

End of music announced at Grammys 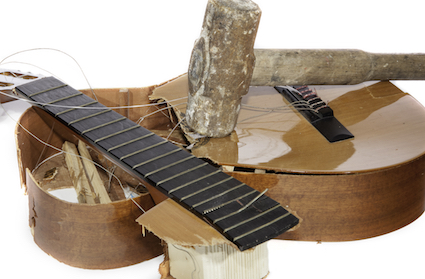 THE official end of music has been announced at the Grammy Awards.

At the close of the ceremony, a collective statement from record label bosses was issued confirming the music industry was being merged into advertising.

The bosses said: “There is no money in this shit any more, except for sponsorship from fizzy pop companies.

“In the past, singers and instrument-players have followed their own wayward agenda, with values that could be described as ‘artistic’. However we now realise that ‘artistic’ values often do not serve the core brand values of fizzy pop makers.

“So we declare the music industry officially over. Henceforth it will be known as ‘soundvertising’.