The billionaire pioneer said he was inspired after the company developed the world's thinnest laptop computer.

“We took most of the useful things out of it and doubled the price. The early demand has been incredible.

“I was then struck by an amazing idea: How much would you pay for one of my shits in a box?”

Jobs said that the first 100 shits will be his, but because of his busy schedule most of the mass market shits will be built in the Far East and carry his personal endorsement.

Carl Knutz, an early adopter of San Andreas, California, said he would pay $1,999 for the shit, but only if it was ultra-slim and back-lit and unable to run the most commonly available software programmes.

He said: “I want a shit in a box that sets me apart from the crowd and tells people that I am young, hip, and creative.”

Bobby Killitz, 23, also of San Andreas, said he would hold on to see if Steve Jobs would produce a cheaper shit later this year after the initial frenzy had died down.

He said: “I think within six months he will either halve the price of the shit or lay two of his logs in there for the same price. He’s pulled that kind of trick before.”

Wives All Round, Says Victorious Romney 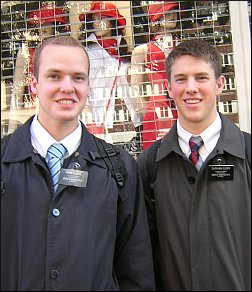 A JUBILANT Mitt Romney last night promised 'wives for all' after storming to victory in the Michigan primary contest.

The Republican candidate said the win vindicated his strategy of being able to have sex with a different wife every night of the week.

He told his supporters: "This country has given me so much: Reliable hair mousse, an industrial-strength jaw and world class teeth.

"But most of all it has given me the right to collect women like so many kitchen utensils and then set them to work on my groin."

He added: "I thank God my ancestors were a bunch of perverts and conmen looking for a way to avoid prosecution in 12 different states.

"I thank God they hit upon the idea of inventing a religion that allowed them to do whatever they wanted. And I thank God that the first thing they agreed was lots of women for everybody."

Romney is to outline a $15 billion programme that will put at least two more wives in every American home. Any gay men who refuse to have sex with their new wives will be set to work in the Utah salt mines.

Republican challenger John McCain said his Vietnamese captors would often torment him with the promise of extra wives, while former New York mayor Rudolph Giuliani recalled the conversation he had with his latest wife on the morning of 9/11.