Hawking warned that Cox knows fuck all about science, and that his deeply flawed documentaries will result in the extinction of humanity.

He said: “For decades I was the popular face of scientific endeavour, with my exciting-sounding but highly complicated books.

“Then along comes Cox, with the layered hair of a born philanderer, telling everyone they can do science when I heard he’s only got a 2:2 from a former poly.

“Yet somehow he has numerous television series like ‘Handsome Brian’s Made-Up Star Nonsense’ while I’m scraping along with voiceover work on broadband adverts.

“Sooner or later he’ll convince ITV2 viewers that they can do nanotech and everything will get turned into grey goo.

“He wears a suit jacket over a t-shirt. Who can trust a man like that? I know for a fact that his scripts are just printed-out pages off Wikipedia.” 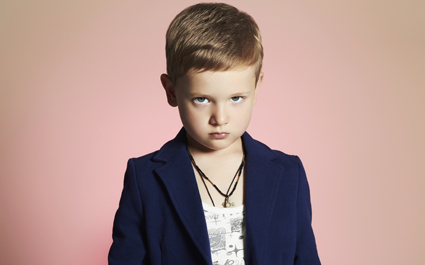 PEOPLE who dress their infant children in designer clothes are unimaginably awful, it has been confirmed.

Researchers at the Institute for Studies found that parents who want their kids to look ‘stylish’ are vain, stupid idiots using their offspring as adverts for their pathetically shallow values.

Professor Henry Brubaker said: “Children get covered in shit, and are also constantly changing in size, so any sensible person will put them in practical clothes, perhaps choosing a jumper on the basis that it has a picture of a tractor, dinosaur or some other thing that they like on it.

“If you’re spending money on tiny Nike Air trainers or suit jackets from ‘Maison Du Infants’ then clearly you want to take a long hard look at yourself.”

Parent Mary Fisher said: “I dress my children like rappers because I am a superficial person who cares more about appearances than I do about tainting the innocence of childhood with vacuous ego-fuelled consumerism.

“But at least I’m honest about it.”