Cloning a mammoth is a shit idea, say experts

PLANS to clone a woolly mammoth have been dismissed as incredibly stupid and shit.

Reactions to the research project included ‘not this crap,again?’, ‘you interrupted me for that?’ and ‘look, just fuck off’.

Zoologist Dr Bill McKay said: “What our overcrowded, resource-stretched planet needs right now is loads of massive, genetically engineered hairy elephants, charging all over the place and wrecking shit up. For Christ’s sake.

“Maybe we can give them some PCP too, and let them run wild through Debenhams, if we’re going balls-out for the stupidest fucking idea ever.

“And where are they going to live? In an icy wasteland? I’m sure they’ll thrive in a secure, non-threatened habitat like that, you fucking morons.”

Gene researcher Dr Emma Bradford, added: “Mankind’s proved itself absolutely tip-fucking-top at looking after the wildlife we already have, hasn’t it?

“Why should we resurrect this poor bastard, when he’s just going to end up in a circus wearing a fez, or in a Cornish Pastie?

“Just because you can do something doesn’t mean you should. Or at least have the decency to try and do some dinosaurs first, you fucking arseholes.”

Arsenal to unveil statue of man checking his texts 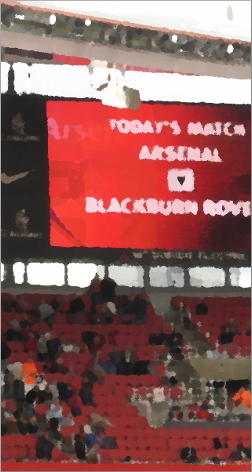 THE next statue to be unveiled outside the Emirates Stadim will be of someone looking really bored.

Sculptor Wayne Hayes was asked to capture the spirit of a typically sepulchral afternoon in North London and the statue was modelled by a 30 year-old PR consultant booking a restaurant table.

Arsenal chairman Peter Hill-Wood said: “The piece, entitled Midtable Ennui, is incredibly lifelike – we stood it next to a season ticket holder for a few matches and he thought it was a steward.

“It’s going to be the first in several new works by Hayes, including the tableaux Leaving Ten Minutes Early and a painting called Empty Red featuring banks of unfilled seats during a league cup match.”

Hayes initially worked in the stadium to soak up the mood of the game but players complained that the noise of his hammer and chisel was distractingly loud.

He finished the statue in his studio on an intravenous saline and Red Bull drip to counteract the drowsiness and admitted the most challenging task was trying capture an expression that combined hope with utter indifference.

He said: “I’m used to recreating all the big human emotions such as despair and joy so it was a real stretch to sculpt the look a man gets when he’s paid £1300 a year to watch Mertesacker try and run fast.

“I hope the fans like my work but even if they don’t, the worst that will happen is them chanting half-heartedly about it on their way home.”