COMIC Relief will soon have the ability to launch strategic comedians.

Defending its investment in the arms industry, the charity said the partnership would create a cannon wide enough to accommodate Lenny Henry.

A spokesman said: “It will have a big wheel at the end so we can point it wherever Lenny is needed and get him there in less than 20 minutes.

“So if there is a crisis in Somalia, all the local population has to do is build a landing area out of mattresses.”

The spokesman added: “Many Somalians are already very familiar with this kind of technology, except this time it will be an explosion of laughter.”

Meanwhile, the investment strategy has been praised by experts for creating a ‘virtuous circle’ of war, famine and charity.

Professor Henry Brubaker, of the Institute for Studies, said: “It’s as simple and beautiful as a big red nose.” 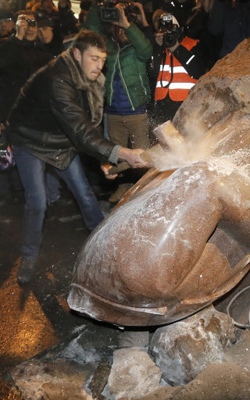 THE destruction of a Lenin statue in the Ukraine has been condemned by hipsters who wanted it for their roof garden.

Style leaders who keep framed Soviet posters in their homes have petitioned the Ukraine to preserve all similar items for use as ironic centrepieces in converted Peckham warehouses.

Joseph Turner, a creative space facilitator, said: “The former Eastern Bloc countries are a goldmine of heroic art about problematic historical figures that would look sweet in my mini-courtyard.

If the Ukraines want democracy or human rights or French-brewed organic coffee or whatever thats cool, but lay off the redundant symbols of totalitarian regimes.

“I need one to drape fairy lights around instead of a tree.

Julian Cook of Hoxton said: The Soviets, Chairman Mao, Che Guevara; maybe they didnt have all the right ideas politically, but they were visionaries of interior decoration and branding.

Stalin may have been responsible for the deaths of millions  Im not a historian, I upcycle discarded packing material into lamps  but the rusted iron statue of him in my double-height stairwell is a really arresting, powerful piece.

It made my Hungarian cleaner break down weeping, which shows this art isnt just for elitists.

If only so much of the iconography of the Nazi regime hadnt been destroyed by philistine bombing raids.