A BRITISH designer has unveiled plans for a pair of hypersonic  boots which will enable the wearer to walk from Europe to Australia in less than 10 seconds while remaining totally invisible.

The boots will be able to walk at speeds of up to 240,000 miles a minute and will be twice as invisible as the current generation of stealth boots being developed by Lockheed Martin.

Designer Stephen Malley, 11, said the boots are still at the concept stage but could be operating by 2050, depending on homework and girls.

The boots will run on rechargeable AA batteries and employ the same masking technology used by Harry Potter's invisibility cloak.

He said they look like a cross between those worn by Frankenstein and the fur lined ones with a zip up the front worn by his gran.

Malley said: "I've also designed a really giant plane that can fly around the world in 80 seconds carrying 30,000 passengers.

"It's got a chocolate factory on board and a football pitch and it's got machine guns on the wings just like a Spitfire and it's also a train."

He added: "And look at this drawing of a dog. My teacher says it's really good and that I should put it in for a prize."

Capello Tells England Players To Stop Being So Bad At Football 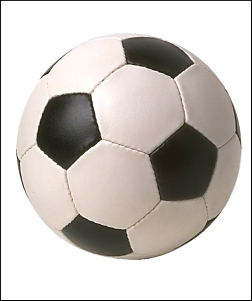 ENGLAND manager Fabio Capello has urged his squad to be much better at playing football, ahead of tonight's friendly against Switzerland.

Capello told the squad their failure to qualify for Euro 2008 was because they had played football with a consistently high-degree of awfulness.

He said: "I told them, 'you are terrible footballers, all of you. But it's okay because I have a plan: Stop being so bad at football and start being really good at it instead'."

He added: "I said to Joe Cole, I said, 'Joe, sometimes when you collect the ball on the half way line you pass it really very badly indeed.

"'Instead, why don't you try passing it accurately to another member of your team, preferably just in front of him, so he can run onto it without breaking his stride?'."

Capello has also advised goalkeeper David James to try and stop the ball with his hands, otherwise it may cross the line, resulting in a goal for the opposing team.

Newly-appointed captain Steven Gerrard said the manager had lifted morale by predicting that the team would win more matches just as soon as they can stop being quite so dreadful.

"He made it very clear that we weren't good at defending or attacking and that we should really try to be much better at both of those very important things. He's a breath of fresh air."

Meanwhile, Capello has also introduced a tough new regime that will see the players forced to cut up their own food,  flush their own lavatories and pay-off their own money-grubbing nightclub skanks.