IMMIGRANTS should avoid acting like British people and behave like Scandinavians instead, according to new government advice packs for foreigners.

New arrivals should not spit at their local shopkeeper, keep a pit-bull in a cage in their backyard and poke it all the time with a stick, or arm their children with guns.

But they should enjoy crayfish and vodka parties, and develop a healthy attitude towards nudity and the screening of hardcore pornography in church.

Communities secretary Hazel Blears said Britain had a proud tradition of welcoming new arrivals from overseas to clean its toilets.

She said: “This country is already chock full of the most ghastly, ill-mannered bastards.

“We want the next generation of British lavatory cleaners to carry themselves with the confidence and charm of a Dane.

Blears also set out five basic rules that foreigners must follow if they wish to be accepted as British citizens:

'Any Chance Of You Working For Five Minutes?' GPs Asked 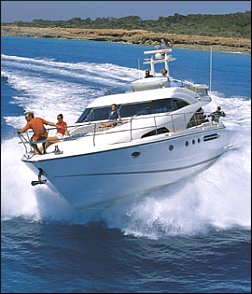 THE Department of Health has written to GPs in England and Wales asking them if they wouldn't mind doing a bit of work, just for five minutes.

The move is part of the government's plan to introduce an out-of-hours service shortly after the introduction of a nine-to-five service later this year.

Health secretary Alan Johnson said: "I had a look at the average GP salary for the next three years and thought, 'gosh, that really is a tremendous amount of money, we should probably ask them to do a bit of work at some point'."

He added: "Although our stated policy is to withdraw NHS treatment from sick people, we do need GPs to maintain the flow of anti-depressants and help us weed out benefit cheats.

"I have today written to them asking if we could have maybe five minutes of their time, twice a week, just until we can import a few more Bulgarian locums who'll do it all for £3.50 an hour."

A spokesman for the British Medical Association said: "Mmmm, I'm not sure my guys are going to go for this. A lot of them have boats now and that's much more time consuming than you think.

"You have learn how to steer it and then how tie it on to one of those big bollard things next to the water.

"And of course, no-one wants to be rushed when they're trying to pick out just the right captain's hat."