Everyone In Public Life Now An Untrustworthy Bastard

ALL people in positions of responsibility are untrustworthy pieces of shit who have made it their life's mission to shaft you, according to new research.

The latest report from the Iain Rowntree Foundation found that everyone is now lying to you and trying to steal your money from the moment they get out of bed.

According to the two year study:

Researcher Dr Wayne Hayes said: "From our analysis of the available evidence everyone is now lying through their teeth all the time.

"For instance, we discovered that the only genuine competition left in international sports is between the rival betting syndicates who are trying to fix everything."

He added: "In a surprising turnaround politicians are now seen as among the most trustworthy figures in public life.

"This is somewhat ironic as they're actually a bunch of lying cunts." 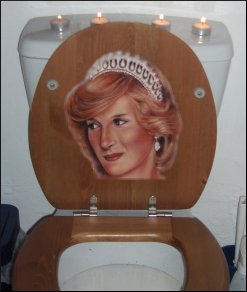 THE Diana inquest jury was last night taken to the bathroom of the Ritz Hotel in Paris to see where the Princess enjoyed her final bowel movement.

The jurors stood in silence before the Armitage Shanks Lichfield™ water closet which still contains the last precious evacuation – preserved by hotel staff in memory of the late Princess’ perfect intestinal health.

A row of Ikea tea lights was placed on top of the cistern to mark the solemn occasion.

Meanwhile one of the local Carmelite nuns who maintain a permanent vigil at the toilet said the rosary as the jury members filed past the makeshift shrine.

A spokesman for the coroner said: “We all know that Diana spent a great deal of time and money keeping her colon well irrigated. Even now, all these years later, it was obvious that this movement had been perfectly executed by a beautiful woman in the prime of her digestive life.

“It really brought home to us all how fragile existence is. One minute you are sitting on the toilet thinking how glad you are you don’t suffer from constipation like poor people on bad diets and the next you are being murdered by the British secret service on the orders of Prince Phillip. Shocking.”

After leaving the toilet the coroner took the jury down the long corridors leading from the front of the hotel towards the service lift at the back. He turned right, then left and left again,then right, then he stopped for a moment, turned left again, stopped again and looked around him and then said: “Shit.”

He then retraced his steps and started all over again.

The inquest continues and is expected to be an expensive waste of time.