Everything boring except computers

THINGS that are not computers are little more than a tedious diversion from computers, according to new research.

The Institute for Studies compared things like all organisms, objects and every other aspect of the natural world to a computer with the internet on it and found them to be a load of rubbish.

They also conducted experiments where humans were made to choose between a series of things that might be once have been considered diverting – including a basket full of baby seals, an attractive, naked woman and a short time travel jaunt to witness a fight between a triceratops and a tyrannosaurus rex – and access to a computer with the internet on it.

Professor Henry Brubaker said: “The computer won each time, except in the case of one 30-year-old test subject who briefly chose the time travel trip but then immediately changed his mind after realising that without internet access he would be unable to immediately show off about it.

He added: “Perhaps it’s because they don’t ask annoying questions like ‘Why don’t we ever have sex any more?”

Father-of-one Stephen Malley said: “What I like about computers is how they blur the line between doing work and wasting your life.

“Well, not exactly enjoy. But I do seem to keep doing it over and over again.”

Housewife Nikki Hollis said: “I was wondering the other day whether, if the house burned down, I would save my laptop or another object, such as my husband.

“Then I realised that the house had in fact burned down around me and that I had been too engrossed in Facebook and pictures of nice tops to realise.

“At that point I saw my husband’s charred remains among the smouldering wreckage and rapidly updated my relationship status to ‘single’.” 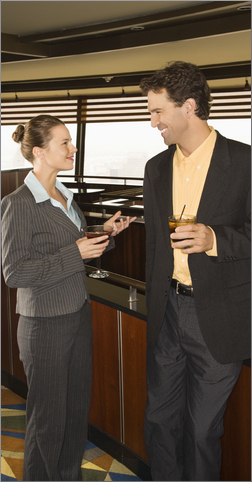 MEN across the world are celebrating International Women’s Day in the hope of having it off with a feminist.

As women remind each other of how very special they are, enterprising opportunists are lining up to say that today really is the most important day of the year.

Tom Logan, from Hatfield, said: “I’ve been thinking about my mother and all the sacrifices she made.

“How she was able to hold down a full-time job and be a full-time mum. She really is a kind of Superwoman.

“If it wasn’t for her, I would not be the man I am today. Can I get you another glass of wine?”

Martin Bishop, from Peterborough, said: “You know, a very wise and wonderful woman once said that the world would be a much better place if Lehman Brothers had been called Lehman Sisters.

He added: “I just think Harriet Harman is brilliant. Really feisty and brave.”

Meanwhile Roy Hobbs, from Stevenage, said: “You’re right, if women were in charge there would be no wars, because a woman’s instinct is to nurture and protect. Except for Margaret Thatcher, of course, but she had the soul of a man.

“Remember how Spitting Image used to show her wearing a suit? They got that right, didn’t they?

“Yeah, I’d love to come up for a cup of coffee. That would be really nice.”

Life is not some piece of shit film, women told

Children to be taught why women are out of their minds