The service, ostensibly favoured by thousands of hollow-­eyed middle-aged men with hugely overdeveloped forearms, would mean that parents have to opt-­in to internet pornography.

Parent Tom Booker said: This can’t happen a moment too soon. Its horrific to think that children could get access to the sort of filth that I regularly fizz up a spunk shandy to.

Sorry I meant ‘research in my capacity as a concerned parent and moral guardian’.

However, the opt-in scheme was not welcomed by all.

Committed masturbator and father-of-three Stephen Malley said: This is just do-gooders interfering with our human rights. Most specifically, the right to watch depraved filth.

Of course theres nothing more important to me than my kids.

It’s hard to respect a man you’ve caught in the spare room ‘just looking at Autotrader’ while naked from the waist down. 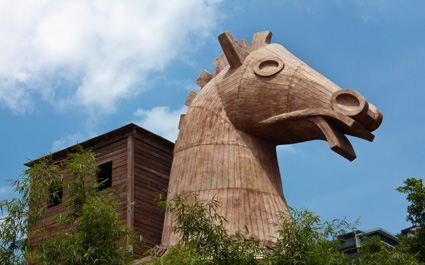 THE nation of Greece said sorry to the European Union with a present of an enormous wooden horse.

Left outside the European Central Bank in the dead of night, the horse has now been moved into the ECB’s central lobby where it is proudly on display.

A gift tag attached to the horse, which is surprisingly light for its size and has small holes along the length of its body, suggested that it should be placed in the bank’s vaults overnight to avoid it being targeted by thieves.

Mario Draghi, President of the ECB, said: “How nice of the Greeks to acknowledge the trouble we’ve been put to on their behalf with this wonderful horse, handmade and so large it could hold a dozen double-decker buses.

“The card with it, which had a teddy bear dressed as a hobo on the front, explained that Greece made us this because they don’t have enough money for a present, which brought a tear to my eye.

“However, unless they can somehow find billions overnight then austerity measures must continue.”

Oddly, Greek representatives in Brussels have hinted that they may soon be in a position to settle their debts and have puzzled the French and German banks that hold their loans by asking if there is any discount for cash.

The government of Spain has reacted angrily to the gift, accusing the Greeks of trying to bribe the ECB and redoubling their own efforts to weave a gigantic sombrero-wearing straw donkey.