Humanity to be destroyed by boredom

HUMANITY will be destroyed by its need to keep dicking about with things for no reason, academics have warned.

The Institute for Studies examined key threats to human civilisation and found that everyone will be killed by either a pointless robot or a scientist who fused tuberculosis with Chocolate Buttons.

Professor Henry Brubaker said: “Next time you see one of those over-excited news reports on some fascinating piece of new technology, wait for the bit where the inventor is asked what it’s actually for.

“They will look a bit confused for a second and then they’ll just say, ‘stuff’.”

He added: “Apart from a handful of cures, we already have everything we need. Yes we do. Shut it.”

Professor Brubaker explained that the ‘household robot’ you will one day own will kill you, not because it becomes self-aware, but because one rainy afternoon you will open up the back of it ‘for something to do’ and you will be immediately electrocuted.

Or the robot, being a mass-produced electronic machine, will break down and fall on top of you, rendering you unconscious and therefore unable to retrieve genetically modified mega-cheese from your smart-fridge.

Professor Brubaker said: “And if you somehow survive the ‘Age of the Robots’ you’ll probably be killed by a watch that’s also a hammock.”

English vaginas are the best in the world, says Farage 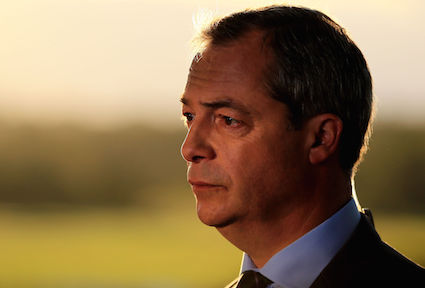 The UKIP leader visited a Strasbourg strip club on a vagina fact-finding mission.

He concluded that foreign vaginas are all well and good, but they lack the strong redoubtable character of the classic English ‘fanny’.

Farage said: “During the course of the evening I was able to compare ladies’ undercarriages of various nationalities.

“There was even a woman called ‘Deluxe’ who said she was from ‘wherever I wanted her to be from’ which frankly made no sense.

“I have to say, the vaginas on display that night were overall not nearly as well-engineered as the English labia I encountered at similar establishments back when I was working in the City.

“Also the foreign drinks are far too strong. They can make you do things you wouldn’t normally, like getting on a girl’s leg and saying ‘I’m a bad bulldog’.”

Farage added that he was ‘less okay’ with foreign penises: “I’ve never seen it myself but apparently Bulgarians have two penises.

“And Germans have a fingernail instead of a bell end.”