While internet giant Google has become the latest company to develop an autonomous vehicle, the concept of the driverless car was originated by pioneering LA engineer Tom Logan, whose boyhood dream was to perform self-abuse while alone in a moving vehicle.

“There was a light breeze coming through the windows and Steely Dan playing on the stereo.

“And just as I thought, onlookers were so amazed by the lack of driver that they didn’t even notice what I was up to.”

“Driverless cars, robot cleaners, android chefs – tedious drudgery will become a thing of the past, allowing humans to concentrate on pleasuring themselves up to 20 times a day. 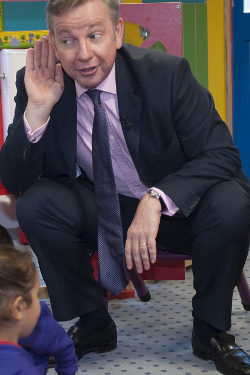 PARENTS last night asked schools if there was any chance they could, for the love of God, just teach their children. 'What's that? Your mummy wants to kick my nuts clean off?'

As it emerged that exam bodies were helping teachers to make exams even easier, parents across the country urged their local school to draw up a list of useful information and then attempt to impart that to their offspring.

Tom Logan, from Hatfield, said: “Reading, writing and a bit of maths. They can get the rest of it from the Discovery Channel.

“Teach them to read and write a proper English sentence. Some angles, maybe an equation here and there. Perhaps a basic understanding of compound interest. Is that too much to fucking ask?

“But please, I beg you, you have to stop all this dicking about. If they fail they fail, but at least you tried to just fucking teach them.”

Emma Bradford, from Doncaster, said: “I’d throw in some geography and a bit of science, but most of all – most of all – I want you to stop turning education into some fucking numbers game and in the name of Jesus fucking Christ on a tricycle, just teach my fucking kids some fucking stuff.”

A spokesman for the National Union of Teachers said: “Britain needs to decide, once and for all, whether it wants a system that educates children or a system that appears to educate to children.

“Because at the moment we’re getting mixed signals.”

Logan added: “I have never expressed even the slightest interest in a system that does anything other than educate children.

“In fact, here’s a quick lesson – what’s the difference between a teacher and an MP? One is an over-paid, over-holidayed, arse-covering piece of shit and so is the other one.”