'I've been online once and there were cocks': Nadine Dorries explains why the internet is being banned

YOU think you like the internet, but you don’t. It’s actually bad. I went on there once and saw not just one cock, but loads of cocks. That’s why I’m getting rid of it.

Yes, there are good sites on there like MailOnline, a shining beacon of truth rightly held up as the 21st century’s greatest achievement. But that only makes the darker corners worse.

I’m not kidding about the cocks. There’s tons of them. Just type ‘cocks’ and you’ll be deluged with big, hard cocks from every direction. I was absolutely horrified.

So many cocks. Honestly you could book a day off work to see every cock on the internet and you still wouldn’t be finished.

‘What about Twitter?’ I was asked. ‘You like that, don’t you Nadine? You once threatened to nail a journalist’s testicles to the floor with his own front teeth on Twitter. You’d miss that.’

After a while all I could see was cocks. I went on Google and I swear the Google logo was made out of cocks. I complained but they said I was ‘hallucinating’.

That’s why the internet’s going. You won’t miss it. I cut through our street’s broadband cable at 3.30am last night, my mind swimming in cocks. Thank God they’ve finally started to clear. 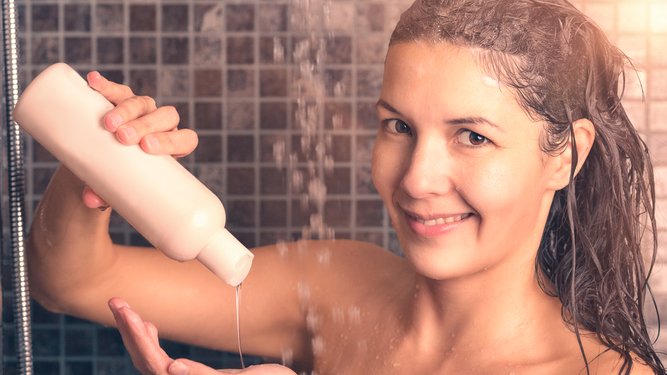 DOES your partner take so long in the shower you’re convinced they’re having a wank? They’re probably doing these weird things instead. Let’s hope so, anyway.

The obvious time to give the shower a good old scrub is when you’re in it, right? And they certainly seem to give it a real seeing to, because they’ve turned the pressure on the shower head up full and you can hear them grunting from the effort all the way downstairs.

Making ‘hair art’ on the tiles

The only reason they’re in the shower for so long is that they’re making shapes and pictures on the tiles with their own hair. They think it’s ‘fun’, but it makes you want to heave because it’s gross. But it’s clearly not wanking. Although why are so many of those hairs short and curly when they’ve got a head full of long hair? How did they all come out? Mysterious.

Even the most grounded adult is entitled to their fantasies, so why not imagining collecting an Oscar in the shower? You think it’s kind of cute, and don’t pay too much attention to the fact that the speech weirdly seems to involve a large chunk of the diner orgasm scene from When Harry Met Sally.

We all feel a bit low sometimes, and a good cry can be therapeutic. The shower is the ideal place because they’ll feel refreshed and more positive and the water washes away the tears. Those moans are definitely heartfelt sobs, not someone enjoying a bit of self-love.

Blowing bubbles with the soap

Your partner is a big kid at heart, and they spend ages lathering up the soap and blowing bubbles by making an ‘O’ with their finger and thumb. At least, you presume that’s why they were in there for 25 minutes and now the bar is worn down to a nub.