Men to live as long as women out of spite

MALE and female life expectancy will even out due to man’s genetic predisposition for unbearable dickishness.

Researchers found that female DNA has traditionally given women an extra 10 years to not have an arsehole around the place, but this has slowly been eroded as the recessive male gene responsible for getting in the way has become increasingly dominant.

Male mice modified with the Obtuse213 gene were placed in a cage with a series of clones of the same female mouse and survived far past their usual lifespan of two years, with one test animal living for eight years before eventually dying two hours after the last female clone died with a look of triumph on his face.

Scientists claimed that, had they not run out of money to create more female clones, the mouse in question might essentially have achieved immortality out of sheer biological bloodymindedness.

Professor Henry Brubaker of the Institute For Studies said: “This is a hereditary Mexican standoff that could go either way, either with both sexes lasting until they’re 300 or we could eventually start dropping dead at 30 like a henpecked Logan’s Run, just to get some peace.

“We’re now looking into identifying the gene that makes people turn into pale, flabby parodies of themselves within 12 months of getting married.”

Professor Brubaker is also researching the inverse proportionality of life expectancy with a life worth living and has already found a link between surviving past 100 and being a git.

He added: “I just need to get my hands on a scraping of Prince Philip.”

Olympics doing exactly what they were supposed to 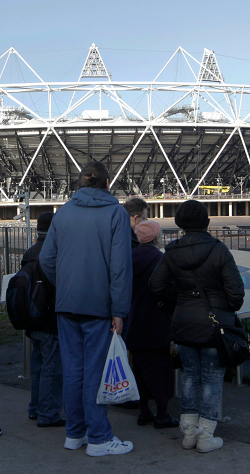 THE 2012 Olympics have been declared a resounding success as the first busload of undesirables was banished from East London.

Organisers said the event was at least four months ahead of schedule in making the east of the city as unaffordable as the west to people who are either unemployed or have a proper, actual job.

In preparation for the post-Olympic influx of six-figure bullshit consultants, Newham Council has now begun herding its substandard social housing tenants into sorting pens before despatching them to a corner of the UK more suited to their third-rate bone structure and beastly televisual inclinations.

Sebastian Coe, Lord of the Olympics, said: “The cleansing has begun, even before the first javelin has been javelled.

“I would like to award Newham Council a gold medal. They are the Fatima Whitbread of enforced gentrification.”

London mayor Boris Johnson added: “We can either have a city wiped clean of low-income troglodytes or we can spend millions encircling London’s hard-working neighbourhoods with 14ft high security fences.

“This will not destroy the social fabric of the east end it will just make it the sort of social fabric one could imagine sharing witty remarks with at a summer drinks party.”

Meanwhile, the first consignment of untermenschen stumbled from their bus, blinking and confused, to be faced with the harsh reality of Stoke-on-Trent.