Meteor was anti-Putin voters being fired into Atlantic

THE bright light spotted over Britain on Saturday was a bus full of activists opposed to Vladimir Putin.

Experts said the bright orange ball was most likely a 49ft long double-decker that would have been filled with Russian troublemakers and then fired from President Putin’s massive, secret cannon.

Julian Cook, professor of dissident ballistics at Roehampton University, said: “This is the same cannon which he will soon use to crush us.”

Astronomers expect regular anti-Putin showers over the next few weeks as the Earth moves closer to the vernal equinox and Putin rounds-up everyone who does not find him sexually devastating.

Cook added: “People in the north of Scotland could see two or three flaming buses a night. How magnificent it will be to witness these celestial chariots arcing their way high over the Baltic sea.

“With a decent pair of binoculars and a clear sky you may even catch a glimpse of the people inside the bus and their defeated expressions.”

Putin was re-elected with 257% of the vote and immediately pledged to be strong, bad-tempered and immensely ruthless in the interests of all Russians, whether they voted for him or were exercising their democratic right to be at the bottom of the Atlantic.

The normally invincible leader then broke down in tears after an aid whispered to him that his cannon had worked perfectly and he was now unstoppable. 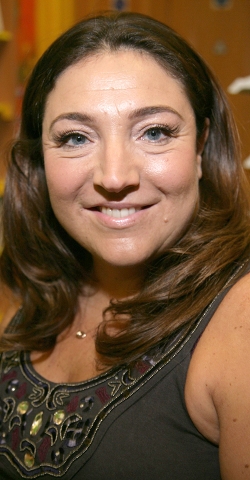 TV strop-wrangler Jo Frost will manage Chelsea until it behaves itself.

While sacked manager Andre Villas-Boas was criticised for his team selections, tactics and not telling Frank Lampard how brilliant he was at goals, the television childminder and guilty wankbank icon will place half the squad on the newly-constructed ‘spoiled piece of shit’ step.

Frost said: “Footballers need boundaries, so while letting David Luiz run around wherever he wanted on the pitch may have seemed kind it inevitably resulted in a tantrum and involuntary urination. From now on he needs permission from me before going over the halfway line.”

Frost will stay with the club until the players stop ‘acting out’ by running to the press or Roman Abramovich whenever they want another £20,000 a week. She will also teach Roberto Di Matteo positive affirmation techniques for those special days when everyone manages to avoid breaching the Race Relations Act.

John Terry, Chelsea’s 32 and a quarter-year old captain said: “Supernanny won’t let me pick the squad anymore but now, whenever I’m a good boy she gives me a big hug like the ladies in the magazines.”

Meanwhile, departing manager Villas-Boas has immediately found work after the FA have offered him the job of England manager in a bid to piss off all the right people.

An FA spokesman said: “He’s foreign and young which immediately alienates the kind of fans that treat train carriages like battle urinals.

“But the best part will be when Lampard and Terry saunter off the plane at Oslo for the friendly in May only to find Andre in the arrivals lounge telling them to shit off.”