A MOTHER has gone fully apeshit crazy about a missing school jumper on a parents’ WhatsApp group, members have confirmed.

Ellie Shaw first broached the missing jumper at 3.45pm yesterday evening and has since posted about it 144 times, each message going to the phones of 38 different people.

She said: “I started light, with ‘It appears someone has gone home with Noah’s jumper, which is labelled NOAH. Please could you check your child’s bag?’ As if it were an innocent mix-up.

“I got a lot of emojis. Messages claiming that people had checked their child’s bag but found only their own child’s jumper. Some mums offered to call the police. Their children can come to Noah’s birthday party.

“But no jumper. So I’m suspicious, so I ask a few follow-up questions and resend the original message and share a few theories, until 2am.

“Then I wake up and it says ‘Nikki Hollis has left the group’. So she clearly know something. So I sent a few more messages about that, asking for a posse to assemble by the school gates to make a citizens’ arrest. And suddenly I’m the bad guy.”

Nikki Hollis said, “I don’t have time for another f**king message about jumpers. I’ve got a job and a life.”

Five possible explanations for Farage being such a twat 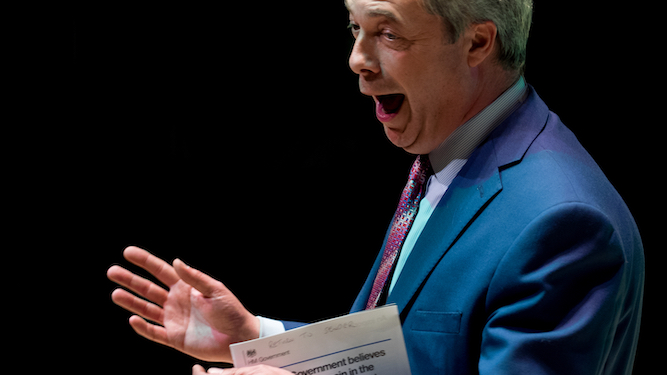 EVER wondered why Nigel Farage feels the need to keep inflicting his Brexit party nonsense on everyone? Here are some possible explanations.

He got no attention as a child

Attention-seeking often stems from neglect in childhood. Intensive role-playing therapy could be the answer to helping Nigel work through his Brexit issues, Nigel dressing in shorts while ‘mummy’ and ‘daddy’ (qualified psychiatrists) repeatedly tell him he is the best at conkers.

A blow to the head

Head trauma can lead to distressing personality changes, such as a short temper, unusually high libido, or Union Jack-wrapped megalomania. A falling roof slate or pub dart to the temple may have given Nigel an abnormal urge to organise torchlit rallies in defence of golliwogs.

At heart, Farage may simply be a frustrated thespian craving the limelight. It’s possible his need to be the star of the Brexit saga would cease if he were allowed to play Mr Toad in a Christmas show or given a regular comic turn in Hollyoaks as a hilariously bigoted shopkeeper.

He believes himself a political Loki

Farage appears convinced he is a brilliant and devious trickster like Loki, the one-time Norse god turned Marvel character. But Loki’s plans, while often doomed, tend to be more interesting and ambitious than failing to get any MPs elected and talking over other people on breakfast TV.

It’s all a big grift

With billionaire backers and con-tricks like charging Brexiters to march to London for him, it’s tempting to think Farage is in it for the cash. However this may be an overly cynical interpretation and he behaves like a twat because he genuinely is a twat.