New law to link hackers with stock photos of hackers

POLICE are to get new powers to link computer hacking suspects with the shadowy, menacing figures seen in stock images.

So evil he reads binary

The law will help cybercrime units struggling to find hackers who work in near-darkness, lit only by the eerie glow of their outdated 1980s greenscreen monitors.

Detective Inspector Emma Bradford said: We see these sinister figures, their faces always hidden, mocking us in every newspaper story about computer security.

But when we raid their homes we find only ordinary people using MacBooks with the lights on who don’t resemble these terrifying images even slightly.

“Using these new laws we can arrest people then take pictures of them in silhouette, wearing a balaclava, against a background of ASCII text.

“There isn’t a jury in the land that wouldn’t convict.”

A hacker, wearing a hood pulled low over his eyes so nobody can identify him at his keyboard, replied: “Got to type fast to steer this military-grade Chinese icebreaker through the firewall and break into that raw data.

Not really. Actually I just guessed your password was your stupid dogs name.

Steampunk goggles made available on the NHS 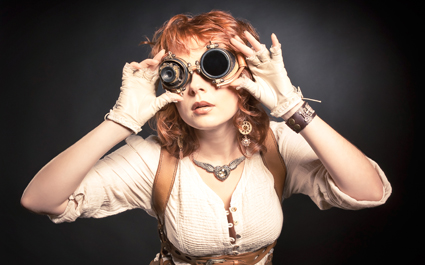 STEAMPUNKS have won their battle for free quasi-Victorian corrective eyewear.

The steampunk movement, which consists mainly of people with terrible eyesight, has long campaigned to make huge metal goggles with elastic straps available on prescription.

“I am effectively blind without my goggles.

“And of course you need a top hat to store them on, which then necessitates the wearing of an old three-piece safari suit, which in turn means you need a massive pocket watch on a chain.”

Popular steampunk goggle styles including ‘Cyber-Mountbatten’ and ‘Disgraced Zeppelin Captain’ will be available on the NHS as an alternative to conventional glasses, although not for kids as they would definitely get bullied at school.