A PETRI dish has become the centre of attention after developing a new strain of thymosin-derived ACT1 peptide.

Just hours after being implanted with an ordinary amino acid sequence, the Petri dish has been hailed as 2015’s next big thing, thanks to its developing relationship with a set of viral proteins.

Scientist Joanna Kramer said: “I had all this nutrient agar lying around, so I bunged it in a culture plate for a laugh and introduced an ACT1 peptide vector, just to see what would happen.

“I shared it with my colleagues by streaking their dishes with a sterilized inoculating loop, but then word got around that the genetic material was replicating exponentially.

“The attention’s got a bit out of control. Just like this new strain, which is self-assembling faster than we can log it.

Lab assistant Emma Bradford said: “It’s all over Ars Technica and SciTech Daily, and the Smithsonian Magazine just said on Twitter that it makes the vinegar and baking powder experiment look like the Queensland pitch drop experiment.”

Kramer’s work has already spawned a host of imitators, with virologists creating their own versions of the Petri dish which they will then submit to peer-reviewed scientific journals for the banter. 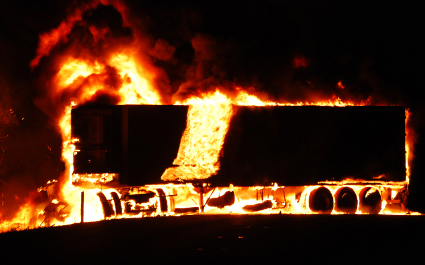 EUROPEAN authorities may ban the importation of fire in unsecured lorries after the Channel tunnel incident.

EU Trade Commissioner Sidsel Larsen said: “In the UK, igniting and maintaining a standard wood fire is a four-man operation, all equipped with extinguishers, costing thousands.

“But in Bulgaria one man with a can of petrol and a lit cigarette between his teeth can start twenty fires in three minutes, which are then loaded onto trucks and driven to wherever they’re needed.

“Unfortunately when these lorries are delayed the fires tend to range out of control, destroying everything in their path, but you can’t restrict trade.”