ENTIRE cities are to be moved and species made extinct to correspond with what it says on Wikipedia, it was confirmed last night.

The website has hired a 'Truth Team' consisting of genetic engineers, demolition experts and people with ESP, who will alter reality to suit the whims of anyone with an internet connection and something to press against the keys.

In accordance with Wikipedia's new status as the arbiter of reality, Paraguay will be moved to Wiltshire, tortoiseshell cats will be given magical powers and all the guinea pigs must die.

Academics and scientists have decided they can no longer be bothered to counter the information disseminated by the online encyclopaedia written by people who spell encylopaedia 'blgkfo1feOOg'.

Daniel Lethbridge, Professor of Knowledge at Oxford University, said: "Although much of the information on Wikipedia – such as 'bats fly upside down' and 'all dinosaurs were from Liverpool' – is completely 'wrong', we've decided to just give up and hand custodianship of facts over to the morons.

"Have you ever been to a corporate 'creativity' seminar where some oily goof on a grand a day tells you there's no such thing as an incorrect opinion? Well, that what the world is like now."

John Robins, a restaurant worker from from Swindon, said: "I logged onto the site and wrote an entry about Adrian Chiles having a frog's vagina on his forehead. It was very noticeable on the One Show last night."

Film director, Guy Ritchie, said: "I've just posted a Wiki entry asserting that Guy Ritchie's film RocknRolla is a timeless classic which provides a stimulating and exhilarating cinematic experience. Be interesting to see how the Truth Team handles that one." 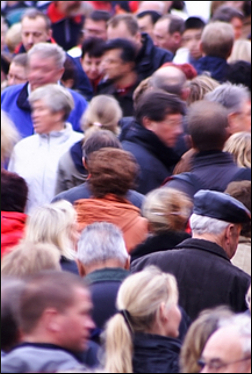 BRITAIN has hit a 50-year high in the production of television-watching food consumption units.

The UK also saw a net increase of 118,000 foreign units who were no longer responding favourably to the television and food in their country of activation.

An ONS spokesman said: "There does appear to be a correlation between unit production, advances in televisual innovation and the perfection of tubed food.

"The previous record was set in 1962 shortly after the invention of situation comedies and squeezable cheese."

Sociologist Dr Tom Logan said: "It seems the units want to produce their own units to share in the bounty of celebrity-based dance programming and a constantly expanding range of minced, reheated animal parts.

"Meanwhile more units are determined to remain active for longer so as not to miss out on the latest developments in Freak-o-Vision.

"And they are able to successfully postpone their deactivation date by using a new generation of pharmaceuticals designed to limit the damage caused by prolonged animal tube consumption."

But Emma Bradford, a stand-alone unit from Peterborough who has combined with three different units to produce three additional units, said she was worried about all the foreign units.

"It is only a matter of time before we will be forced to watch their television programmes and consume their spicy microwaved meat bags."