RIGHT-wingers are intelligent enough to know that everyone is ultimately a self-serving bastard, according to new research. The Institute for Studies found that while stupidity leads to racism, right wingers were more likely to know not to stand in front of George Monbiot at the top of some stairs.

The research also showed that Thatcherites can be interested in quantum physics, while Labour voters include barely sentient fist-throwers like John Prescott and Cheryl Cole.

Professor Henry Brubaker said: “Deciding who’s cleverest between left and right is like deciding which tube of Smarties would make the best Pope.

“But right wingers are at least intelligent enough to assume that everyone is a potential enemy. Especially those who give hugs instead of handshakes.

“And while racism, homophobia and insisting climatology is a pyramid sales scam are all a bit dense, so is standing on top of a pile of skulls and shouting, ‘let’s try it again’.”

But Julian Cook, from Finsbury Park, insisted that, if you thought about it, Stalin was actually right wing, which everyone on the left thought was a very clever thing to say.

He continued: “Socialism will always work brilliantly because it is humanity’s natural instinct.”

Roy Hobbs, from Guildford, added: “What a poof.”

NHS to use frantic hand gestures 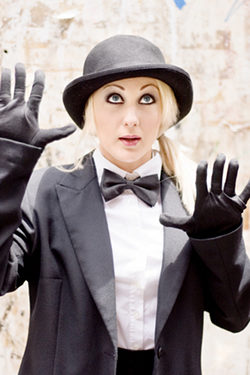 NHS staff are to start miming what they want to do to foreign patients in a bid to save money. 'We're going to quarantine you because you have the ebola virus'

As a report showed the health service spent 0.02% of its budget on translation services, roughly half of what it spends on cleaning fluid for the plastic plants in reception, doctors will now point at diagrams in textbooks before pointing at the patient and nodding enthusiastically.

Staff nurse Nikki Hollis said: “It’s going to save an awful lot of money when all the foreigners die of allergic reactions to medicine and not knowing what the gesture for a burst appendix is.

“Medical care for overseas patients is going to turn into a potentially fatal game of Give Us A Clue.”

As well as pointing at parts of the body and grimacing, hospital staff will also be asked to talk at foreign patients slowly in English in a progressively loud and more aggressive manner. Staff will also enhance their pronunciation by adding the letter ‘o’ to every other word and pronouncing ‘r’ as ‘l’.

Any patient unable to explain what their illness is will be issued a photograph of health secretary Andrew Lansley pointing at an airport departure lounge with an angry but disappointed expression on his face.

If successful, the measures will be widened to English-speaking patients who have a bit of an accent and by 2020 medical care will only be available to anybody who sounds like Brian Sewell.