She added: "The woman can then return to pleasuring herself by candlelight while eating a big bowl of chocolate buttons and reading about the fat parts of all the celebrities she watches on Living TV."

News of the breakthrough has led to a wave of nostalgia among women for the men they will soon be chasing down the garden path with one of their own golf clubs.

Emma Bradford, from Peterborough, said: "I think what I'll miss most is being spoken to like a child by someone who thinks he's the cleverest person in the world because he read the answers to all the Trivial Pursuit questions when he was 15."

Jane Gerving, from Hatfield, said: "I'll miss living with the funniest man in the universe. He's just so very fucking funny. All the time."

She added: "And of course, I'll miss the farts. The unrelenting tsunami of God awful, eye-watering, gut-wrenching farts."

Scientists now predict the last man will have the last wank sometime in 2093. 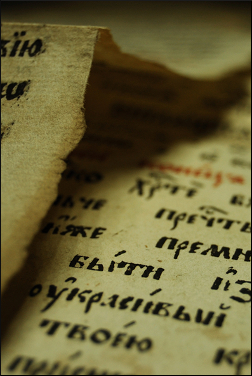 THE Codex Sinaiticus, believed to be the oldest surviving Bible, features a garish embossed cover and an endorsement from the Emperor Constantine describing it as a 'supernatural page-turner par excellence'.

According to the latest research by scholars and theologians, the Bible was conceived as the ancient equivalent of a Clive Cussler novel.

Dr Martin Bishop, head of scriptural studies at the University of Geneva, said: "In the early 4th Century there was a lucrative market for big, thick blockbusters featuring complicated plots and lots of explosions. The sort of thing a middle-aged Roman could read in the spa or when travelling to invasions.

"The title is written in big gold letters that give a sort of 3D effect with the tagline, 'They thought they could question God's plan for mankind… They were WRONG.' There's a blurb on the back and some numerals which are probably an early ISBN number."

The Codex is inscribed 'To Emma, with love and thanks for all the biscuits' and at the end has a series of short adverts for other popular titles including 'A Slave Called 'It'' and 'The Gladiator With The Dragon Tattoo'.

Dr Bishop added: "We believe the New Testament was a sequel, rush-released in response to the popularity of the original. Clearly it wasn't successful or they would just have kept churning one out every couple of years."

Noted thriller writer and priest Rev. Bill McKay said: "Whether or not you believe the world was made by an omniscient celestial entity, in seven days and at a point in history shortly after the domestication of dogs, it's still a cracking good read.

"With sexy, in-your-face characters, exotic, sexy locations and a brilliantly original and very sexy plot, it makes Philip Pullman and his atheist polar bears look like a right load of old shit."