‘Sharting’ to be renamed ‘Faraging’

‘SHARTING’ is to be renamed ‘Faraging’ in honour of the former UKIP leader, it has been confirmed.

Officials said Nigel Farage has come to epitomise the act – in which people accidentally shit themselves while trying to fart – and that naming it after him ‘would be better than a peerage’.

A spokesman for the Oxford English Dictionary explained: “Look at any transcript of his speeches – you know it’s going to be unpleasant, but it is always so much more disgusting and stomach-turning than you could have imagined.”

He added: “I actually Faraged last week after some dodgy quinoa.”

Experts also drew attention to the parallels between the UK essentially soiling itself by letting the former UKIP leader’s xenophobic rhetoric lead to the country’s oh-god-we-really-shit-the-bed-here-guys Brexit vote.

I like people who shout ‘Hail Trump’, confirms Trump 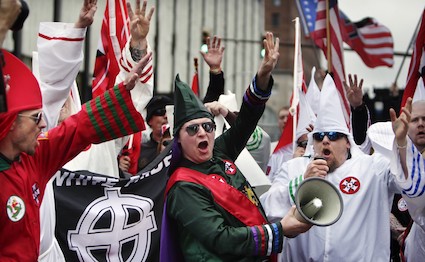 DONALD Trump has clarified his position on violent white supremacists by confirming that he really likes being ‘hailed’.

The US president stressed that an individual’s views on race or Hitler were not particularly important compared to their willingness to shout ‘Hail Trump’ in a public place.

He said: “Who doesn’t want to be hailed? No-one, that’s who.

“When I see a group of men marching down a street shouting ‘Hail Trump’ it feels good. Very good. They don’t necessarily have to be wearing the same uniform, but it does help.

“Then I see a large group of people saying mean things about me – i.e not hailing me at all.

“You would have to be some sort of idiot not to prefer the people who are hailing you.”

He added: “Also, I like their pointy hats and their cool flags. Good branding!”