TUBE travellers will be able to broadcast their ignorance even when 150 foot underground by summer, promise TFL.

Visitors to the Olympics, unwashed trustafarians posing as beggars needing a few coins for a hostel bed that does not exist and seethingly homicidal commuters will all be able to access Twitter to complain about being sat in a tunnel for the last half hour via wifi.

TFL chief Roy Hobbs said: “Imagine a wardrobe-sized internet cafe being kicked down a metal hill by an overpaid ingrate that goes on strike every other week.

“We’re bringing the unbearable misery of public transport into the 21st Century by making sure that the very second a thought about toast pops into the echo chamber of a passenger’s skull it can immediately be broadcast to a global audience of poltroons.”

Employers have welcomed the introduction of wifi to the tube after years of not being able to pester their suicidal workers for the 20-odd minutes they are underground.

Experts estimate that productivity should leap by 0.002% presuming this does not prove to be the final step that causes everyone to leap in front of their train rather than get onto it.

Hobbs said: “My epitaph will read that I was the man that ensured Londoners were able to download a photo of a dog and a cat getting married.”

Occupy record 'may have a rap in it' 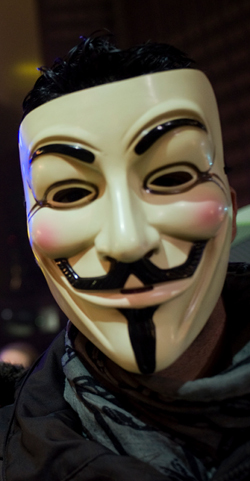 THE impending first release on the Occupy movement’s record label may feature a short burst of rapping, experts have warned.

Protest songs with rapping in them were thought to have become extinct in the late 90s after a wave of tetanus killed most of the performers at an ‘anarchist fayre’ in Somerset.

However the Occupy movement’s anti-capitalist sentiment, large European fan base and interesting hats have triggered concern that the newly-founded ‘Occupation Records’ may be a vehicle for songs combining guitars and spoken rhymes.

Professor Henry Brubaker of the Institute for Studies said: “The 90s crusty scene produced 418 out-of-context raps, 418 of which were shit and 417 of which rhymed ‘your wealth’ with ‘bad for my health’.

“History has taught us that the only thing that can be ‘fused’ with rap, and not result in something woeful, is some other rap.

“The prospect of Occupy ‘fusing’ more traditional protest genres of folk and punk with hip hop, as a means of embodying some sort of ‘global melting pot of ideas’, is a clear and present danger.

“Should a fresh incidence of songs-with-raps-in occur, it could transport culture back to the dark age of shirtless men shouting about how television drains your brain, on Channel 4 on Friday night.

“Live bands will be forced to re-recruit their token DJ, assuming he hasn’t since died of a heroin overdose, so that they can repeatedly touch a record while staring.”

“In short, he’s a just another drone, living in a war zone, while the governments makes its clones and the people gnaw on bones.