DO you find the young people confusing and odd? Don’t worry – 48-year-old father-of-three Martin Bishop can answer your questions and make you trendy again:

A website for miming to songs, which sounds like a massively trivial waste of time just like Top of the Pops was for 40 years. I’ve joined in by doing Summer of ‘69 by Bryan Adams. When I showed it to the kids they just sat there with their mouths hanging open, stunned that I’m so up-to-date with technology.

A type of rap music that is also a crime. Doesn’t bother me because I’m down with the ‘old skool’ rappers – Chuck D, KRS-One, Will Smith – and I’ve never been troubled by the law. Apart from stealing flumps from the pick-n-mix in 1982, but I chose a different path in life.

Apps could turn out to be a flash in the pan, but they’re big right now, so get with it! They’re just computer programs like Horace Goes Skiing, but on your phone. I use the B&Q app a lot for browsing garden tools, then you just ‘click and collect’. It’s like living in the future.

People love a good ‘Twitter storm’ on this sober, reflective topical discussion website. Some of the comments appear a bit spirited, eg. ‘I hope u get sent a bOMB scum bitch’, but from what I’ve read that’s normal and everyone takes it in good humour.

Essentially the telephone dating service Dateline from the 80s, with pictures. The only difference is you have no idea if the person is a serial killer or doesn’t even exist at all. But that doesn’t matter because you ignore everyone but the stunning ones who never reply anyway.

Teens are cray-cray – meaning crazy – for a trendy Apple watch, which come with the whole internet included. They’re pricey, but if you can afford it get one. No way will your young ‘uns get bullied when they’ve got the coolest dad in the playground. 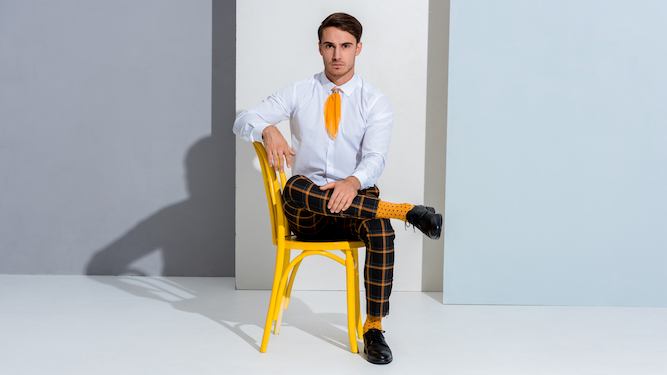 ALL posh twats wear brightly-coloured trousers. But the colour of the posh twat trousers your posh twat is wearing show you just what type of posh twat he is:

Boring standard-issue posh twat. Most likely in saggy corduroy. Once he starts his monologue about how it’s so hard to get your children the right internships these days, get out before he raises his views on the welfare state.

The tipsy posh twat. The colour of the pantleg is no coincidence – this bloke has port for brunch every day, and carries on from there. You would have thought that amount of fortified wine would make him black out and shut up by now, but apparently not.

The God’s-gift-to-the-world posh twat. Nothing is more indestructible than the ego of a man wearing white trousers. You may not giving a flying f**k where he went to school, but he’s giving you a full breakdown of his educational history regardless.

The landowning posh twat. Not to be confused with an actual Scotsman wearing tartan, the plaid is donned by a twat with a stately home who likes to think driving a Land Rover through fields counts as agriculture and makes him a farmer. That’s what he tells his staff.

The poshest and twattiest of posh twats. Once you’ve got zero shame about being unignorably a posh twat you’ve passed the point of redemption. You can run, but you’ll still see him on the news when he’s appointed to the cabinet in three to six months’ time.

The maddest bastard posh twat. Speaks for itself. Either that or he’s a confused gay German who is very, very disappointed in our country.