MOST people in the UK believe the right to toss themselves silly is as important as clean, running water, according to new research.

In a Digital Britain survey, 75% of respondents said high-speed broadband and its cargo of unremitting smut should be included in the United Nation's Charter on Basic Human Rights.

Researcher Charlie Reeves said: "For the majority, housing, health care and primary school education are nowhere near as important as eye-watering close-ups of splayed orifices from every corner of the globe.

"Many say they would even give up electricty, though of course most of them are too wank-dazed to work out how they would power their laptops without it."

Many are angry with government's failure to provide universal broadband access, while lawyers said it undermined the European Union's commitment to ensure poorly-lit footage of slate-eyed Russians joylessly pistoning into bored prostitutes.

But culture secretary Andy Burnham insisted: "We are working hard to ensure that one day, every man, woman and child will be less than a minute away from something utterly repellent."

Tory leader David Cameron supported the survey results stressing it was 'vital Britain is able to see, via live streaming, the moment Gordon Brown finally flips and runs screaming from Downing Street, smeared in his own kak'. 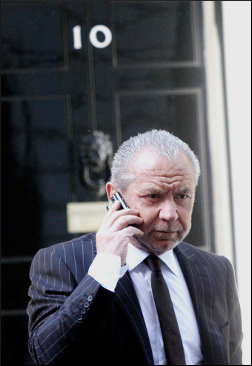 GORDON brown reasserted his authority today with what his supporters insisted was a stupid, pointless reshuffle that won't make the slightest difference to anything.

In a series of decisive moves Mr Brown kept most of his senior ministers in the same jobs after ruthlessly agreeing not to upset anyone in case they went on television and said he was rubbish.

According to Labour sources Mr Brown last night decisively abandoned a plan to make Ed Balls the chancellor amid fears that Alistair Darling was about to become the most tedious man to topple a prime minister since Geoffrey Howe.

David Miliband remains as foreign secretary for diabolical reasons known only to Tony Blair, while Amstrad boss Sir Alan Sugar becomes an 'enterprise czar' as part of Mr Brown's plan to restore Britain's reputation as the global centre for shitty, useless hi-fis that sound like they are underwater.

And in what Labour sources described as 'one final act of utter bastardry', Mr Brown handed the Home Office to leadership favourite Alan Johnson in a bid to destroy his reputation as a safe pair of hands by Monday morning at the latest.

A Downing Street spokesman said: "We've decided to leave the post of work and pensions secretary vacant, mainly because there's no work and no pensions."

He added: "It's a fresh, exciting team of pretty much the same discredited people doing the same appalingly incompetent things. It can't possibly fail."