Woman postpones software update for 500th day in a row

A WOMAN has clicked ’not now’ on her automatic software update for the 500th consecutive day.

Jane Thomson reacted to the notification in the top-right corner of her screen by saying ‘whatever’, much as she has done every day for almost 18 months.

“Except tomorrow, I expect I’ll be playing Minecraft, or putting pictures of my breakfast on Pinterest. So we’re probably looking at the weekend, unless something else comes up.”

Thomson said that most of the software updates seemed to refer to applications she did not know she had.

She said: “Apparently GarageBand will run more smoothly if I install this update. That will certainly come in handy when I decide to record an electronica album.”

Thomson added that if the software was so important it should have been on her computer in the first place. 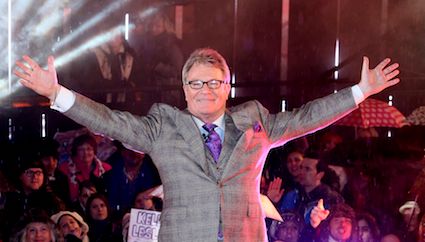 JIM Davidson’s 2014 victory in Celebrity Big Brother was the first sign of the rise of far-right populism, experts have confirmed.

The Institute for Studies said Davidson winning the reality TV show was ignored by western governments who did not understand the significance.

Professor Henry Bribaker said:  “We can now see that Davidson’s victory was a dry run for the Brexit vote.

“But in this case, people actually knew who and what they were voting for.”

He added: “The fact that the British public would spend even a penny making a phone call to vote for Jim Davidson should have been an obvious sign that people weren’t very happy.

“And he’s an OBE, so what does that fucking tell you?”