JEREMY Corbyn took ages in the Commons canteen as he pondered aloud whether to go for the pasta bake or the vegetarian chili.

A lengthy queue, many of them his own MPs, grew increasingly furious as he mulled the decision, went into a huddle with his advisers before ultimately deciding to go for the chili.

He then changed his mind as he reconsidered the merits of the pasta bake ‘because the cheese looks nice’.

Corbyn said that he would not come to a final decision until he had issued a grassroots consultation with the party membership.

This led to further delays as he tried to put out a tweet using his Nokia phone.

As levels of exasperation in the queue became intolerable, the Labour leader then asked the cashier if he could pay by cheque. 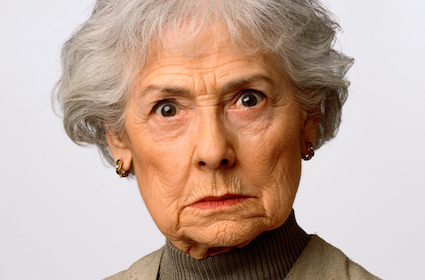 A MAN who loves humorous ‘bad taste’ birthday cards believed one would be appropriate for his 80-year-old grandmother.

Wayne Hayes felt no one could fail to be amused by the card depicting a prim 1950s housewife with the contrasting message ‘Happy fucking birthday, you manky old slutbag!’.

Hayes said: “I gave the exact same card to my mate Emma on her 40th and she pissed herself, so naturally I assumed a much older woman of a totally different generation would like it too.

“However when I gave the card to my gran she went pale and said ‘What a wicked, wicked thing to say’. Then she put it in the bin and threatened to ‘box my ears’.

“I tried to explain, but she still looked very suspicious. Thank god I got her a box of Celebrations or she’d still think I was literally telling her to fuck off for being a slag.”

He added: “The card didn’t go down well on that occasion but I still find them unbelievably hilarious, so my dad’s definitely getting one with a Victorian gentleman on the front saying ‘Have a fucking shit Father’s Day, you bent twat!’”