LIES are the glue that holds society together, and sometimes you’re forced to be not 100 per cent totally sincere. Like every time you use these phrases.

Let me know if you need anything

You say this to a sick friend or a relative going through a tough time but what you really mean is ‘Do not contact me until your period of misery is over’. Or ‘I guess I could get you a magazine but I’m not doing your f**king shopping’.

To the bride at every wedding ever, even when they look like the marshmallow man out of Ghostbusters.

Hope you are well

Whether emailing a colleague or your letting agent, this is your go-to opening sentence. The fact that it’s these unloved twats shows you don’t actually care if they’ve got bubonic plague.

Everything is shit but you’d rather die than admit it to anyone. Admittedly bottling up resentment is how mass shooters start out, but you’ll cross that bridge when you come to it.

Do you need help with the washing up?

The last thing you want to do is help clear up at a dinner party but it’s kind to offer. If they answer ‘yes’ they are dead to you.

No worries if not

What you mean is: ‘If you can’t do this thing I have asked for I will be absolutely devastated.’

Never going to happen. But let’s do the decent thing and pretend that it is. You didn’t specify when. 2052? They might be dead by then. Hopefully.

It’s so nice to see you

When you bump into someone in the supermarket and it ruins your plan to pop in for a sandwich and get out of there, it is definitely not nice to see them.

The correct response to this is unequivocally ‘Fine, how are you?’. You don’t actually want to know if someone is anything other than ‘fine’. Your time is precious and you don’t need them bothering you with some pissy little problem like getting divorced.

You have no intention of trying anything other than putting your pyjamas on and watching Netflix later.

Closing kitchen cupboards noisily: Totally pathetic ways to show your partner you're in a huff 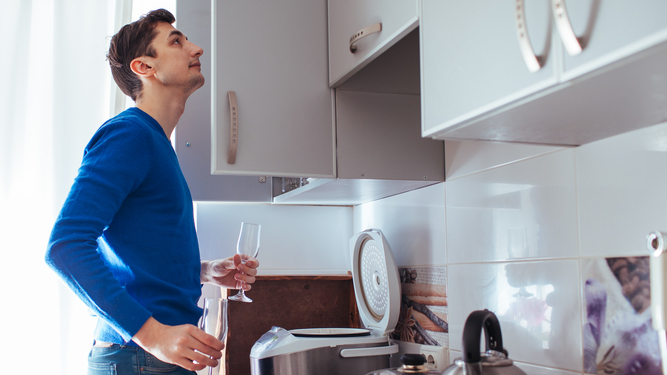 PISSED off with your other half? Trying to display that annoyance in the lamest way possible? Here are five surefire ways to make your feelings known.

Going to bed at 8pm

After an evening of ‘What’s wrong?’, ‘Nothing’s wrong’ and ‘You seem quiet’, teach them a lesson by going to bed ludicrously early. 8pm is good. While you think this sends a message, your partner will just use the opportunity to watch several episodes of Ozark and drink any booze in the fridge. Meanwhile, you toss and turn in bed, unable to sleep for the next four hours.

When arguing, the kitchen is a major battlefield. From standing in front of the knife and fork drawer on purpose to refusing to engage in the daily ‘What are we having for dinner?’ chat, shit gets real there. But the clearest way to send a message is to slam kitchen cupboards.

Turn your kitchen into one big percussion instrument – the dishwasher is good for clattering around annoyingly too. The key thing is to let your partner know you’re displeased without actually saying so. Although they might just think you’re being a clumsy bastard as usual.

Not filling up their car

If you borrow their car and spot the petrol gauge reaching absolute zero, don’t fill it up. Simply coast back home on fumes. They’ll then have the minor inconvenience of filling up the car instead and fuel is expensive these days so they’ll be out of pocket. Oh, hang on, you use a joint account and they’ll probably buy a Lucozade and a Snickers from the garage too. Bollocks. You did not think this one through.

Nothing resolves relationship problems better than some random resentful cleaning. Get Marigolded up and start bleaching the bathroom floor on your knees. If using a mop, huff or sigh loudly every time you move it. Sure, none of your issues will have been dealt with, but your home will be f**king spotless.

In Britain, consuming tea ranks just below Sunday roasts and Queen Elizabeth II in order of importance. So if you want to hurt your partner without using words like ‘cow’, ‘wanker’, ‘stupid’, ‘feckless’ and ‘waste of DNA’, the best way is to leave them out when making a brew.

When you enter the room with a solo cup of tea, sit down and slurp away, the high will be like trying heroin for the first time. Your partner will be visibly crushed and wracked with remorse. Don’t do yourself a little plate of biscuits too though. That’s going too far. You might as well ask for a divorce on the spot.