THE current year has been abandoned as a waste of everyone’s time after just five days.

2015, which everyone had high hopes for as recently as Friday, has already been irrevocably soured by everything from overdraft charges to broken taps to that dick Jeremy at work.

Librarian Stephen Malley said: “This year was going to be the fresh start I needed to turn things around.

“But then on Saturday someone left a dent in my car door in Tesco’s car park, and now 2015 is dead to me.

Forget all those resolutions. For the next 350 days, I’m just killing time.

Joanna Kramer of Shrewsbury said: “A new year dawned full of optimism, all the mistakes of the old one washed away.

“Then I went to work and the same old twats were babbling about Broadchurch, and it became clear it was already too late.

This year’s persistence of optimism is the longest since 2004, where hope continued until January 8th when Francesca Johnson of Nottingham stubbed her toe. 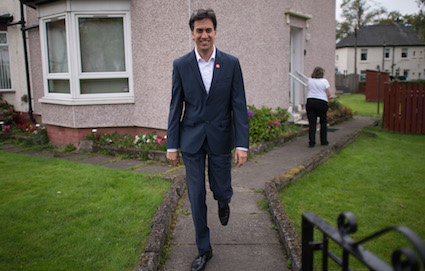 BRITAIN is to draw straws after Labour pledged to bother four million people in the privacy of their own homes.

As the party leaders kicked off a 17-week election campaign without asking anyone, Labour’s Ed Miliband was first to openly threaten the electorate with face-to-face contact.

But communities across Britain are organising a lottery, with all those chosen to speak to some peachy-keen Labour tosspot being compensated with a £10 iTunes voucher.

Organiser Helen Archer said: “Rather than have these fuckers roaming the streets, randomly knocking on doors, let’s offer up four million human sacrifices and get this bullshit out of way, sharpish.”

Meanwhile, more than six million people have asked to be visited by a UKIP candidate because they think it will be weirdly enjoyable.