SOME words will cause horror if you say them, others you’re not so sure about. Here are some that are either totally fine or will get you ostracised forever.

When you were a kid everyone would refer to actors of the female gender as actresses and nobody gave a toss, but nowadays the word is a bit of a minefield. You could always say ‘female performer’ if you’re not sure but that’s a bit clunky. Best just to shut up forever.

This is either hugely offensive to people with brain disorders, or the word hot-shot office workers use when coming up with cool ideas. Or at least that’s what you imagine they say. You’ve been unemployed most of your life and get all your frames of reference from daytime repeats of 90s sitcoms.

No, not ‘crap’, the other one, Jesus. Depending on who you talk to this is either the worst word in existence or one that needs to be reclaimed as an act of female empowerment. Good luck trying to look like an ally by saying the C-word if you’re a bloke though, as anyone who overhears you will think you’re a vile misogynist.

Used to be an acceptable way of referring to pedants who call you out on dangling participles, but now people have realised it’s a bit insensitive to drag the Holocaust into conversations about sentence structure. Use more PC alternatives, such as ‘tedious f**king wanker’.

Anything that describes ethnicity

Even if it’s the most inoffensive word relating to a person’s ethnicity, you’re not sure if you should steer clear or not. Instead pretend you’re so superior you don’t even see race. It’s cowardly but enlightened. 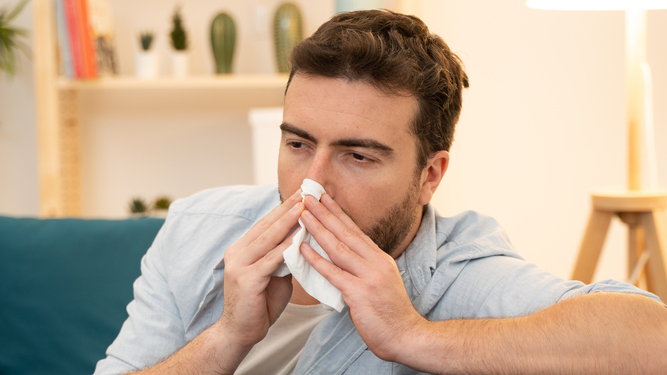 MEN are known for exaggerating the size of ‘the one that got away’, but that’s just the tip of their iceberg of lies. Watch out for these…

A highly dramatised illness or injury, eg. annoying heartburn, will have a sequel – his arduous journey back from the brink of the abyss. Do not try and compare it with your own inferior woes. Seriously, it felt like he was being melted from the inside by boiling acid.

Maybe he’s managed to rant about parking on a local radio phone-in, or sat in a tube carriage near Sandy Toksvig (SANDY TOKSVIG!). Either way, it will be repeated endlessly, becoming more grandiose upon each recital. Pray he doesn’t have a more in-depth encounter, like telling Jimmy Carr where the toilets are. That gripping anecdote will echo down the ages.

Sex stimulates the part of a man’s brain that produces exaggatonin, a hormone that enlarges his sexual prowess. He might jest ‘I don’t like to brag, if there was an England team…’ and his penis size will be above average, but not implausibly so. He’s strangely vague about his number of sexual partners – it should be easy to tot up – but rest assured, it’s a lot.

The sport men excel at is exaggeration. They see no difference between victory in an Olympic discipline, scoring at lads-and-dads football or scraping to victory in Hungry Hippos. Any defeat is obviously the fault of the referee or a defective, insufficiently peckish hippo.

The outcome of conflicts

Whether it’s an argument with a colleague or returning a defective lamp, a man will have won. Some will pathetically relate ancient primary school fights, while loony fantasists will spin a bullshit tale of fighting off a ‘gang’. None will ever claim to have won an argument about putting the bin out, though. That would be too implausible.