PEOPLE who have never had sex are most likely to request aftershave or cologne as Christmas presents.

Researchers found virgins believe a premium fragrance is the best way to mask the odour of sweaty terror that engulfs them when they are close to performing an intimate act.

Professor Henry Brubaker of the Institute for Studies said: “Pragmatic virgins prefer subtle scents with hints of sandalwood and citrus, but the wildly ambitious, unrealistic ones think that they need a litre of Drakkar Noir and women will suddenly be on them like bears on an ill-prepared mountain climber.”

Virgin Bill McKay, who almost had sex in 1996, said: “I was really hoping that my work Secret Santa would get me aftershave, and that I’d have some sexual success at the office party.

“But I ended up with a joke ‘sexy’ fireman mouse mat. I don’t want a picture of a man who has actually had sex, although I do want to know what he smells like.”

His friend Roy Hobbs said: “If Bill could find some way to mask the stench of desperation, that would be a start. He doesn’t even need to smell especially nice – just clean.”

Mariah Carey getting nothing for Christmas again 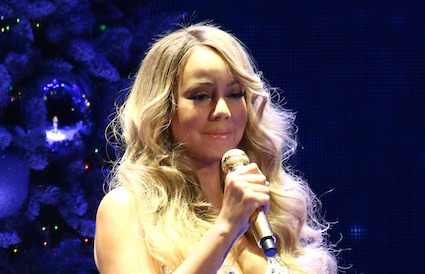 POP star Mariah Carey will, once again, receive no Christmas presents from her family or friends.

Despite issuing a long list of things that she would like for Christmas, sources close to the star claim to have been bombarded with subliminal messages that she does not actually want anything at all.

Husband Nick Cannon said: “Mariah told me very forcefully that she wanted me to spend a minimum $200,000 on handbags, jewellery and designer clothing, but the moment I entered the store I just couldn’t do it.

“I know this sounds crazy but it was like I could hear her voice in my head telling me, over and over, that she didn’t want any presents under the Christmas tree.

“I left and sat outside in the LA sunshine muttering to myself, ‘Nick, you know she wants presents. Your wife is one of the most materialistic people you’ve ever met.

“But in every store I went in, from Tom Ford to Bulgari, her voice was there insisting that she wouldn’t ask for much this Christmas, not even snow, and that all she wanted was me.”

Cannon admitted the same thing happens every year and on Christmas Day he expects the diva ‘to go completely apeshit, as usual’.