Al Jolson To Be Exhumed And Slapped About A Bit

THE corpse of legendary entertainer Al Jolson is to be exhumed and given a right good slap, it emerged last night.

The world's most famous black and white minstrel will be abused amid a fresh wave of anger over things that are supposed to look like black people but don't really.

Jolson, singer of such favourites as Swanee and Oogie Oogie Wa Wa, will be disinterred from his final resting place at the Hillside Memorial Park Cemetery in Culver City, California and punched in the face.

The punching will be performed by the great grandson of the first black man to be offended by Jolson singing Mammy while waving his hands around.

Meanwhile the Queen is to send a written apology to every Afro-Caribbean person in the Commonwealth after it was revealed the Royal Estate at Sandringham was employing thousands of golliwog toys as slaves.

The toys, originally captured and sold to the Crown by the Thatcher family, have now been freed.

But Britain's black population remains split over the issue between those who have far more important things to think about and those who get paid to complain about it.

Tom Booker, an accountant from London whose grandparents were born in Jamaica, said: "That looks absolutely nothing like me. Good day." 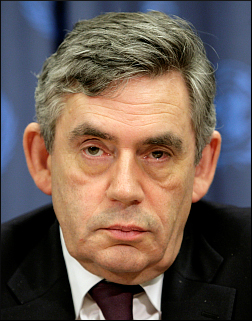 According to experts at the Institute for Studies Mr Brown is showing clear signs of the illness includingtension, anxiety and an insatiable desire to continually blame everything on Americans.

Professor Henry Brubaker said: "He has character traits that make him particularly prone to becoming recessed.

"These include chronic introversion and an underlying paranoia, as well as using billions of pounds of other people's money to buy votes and spending 10 years telling bankers they could do whatever the fuck they wanted to."

The professor said the symptoms can become so acute that the patient sees or hears things that are not there, such as economic recovery by the fourth quarter of 2009.

And he claimed the prime minister's condition had now reached the stage where other people could become recessed simply by listening to his voice or looking at his face.

Professor Brubaker added: "I became particularly concerned last week when the prime minister flew to Egypt, took all his clothes off, jumped into the Nile and stood there waist deep in the water before announcing to a group of puzzled farmers that he was not in the Nile."

"I turned to my wife and said, 'you know what Elsie, whether he likes it or not, that is a man who is clearly in the Nile'."