‘BLACK Friday’ shoppers have been told it is fine to maim anyone getting in their way.

With high street shops slashing prices by up to 70%, David Cameron announced that consumers can “do whatever it takes” to get the bargains.

He said: “Today the only law is the law of the jungle. Look around your home – is there something you can use for a weapon? Stay alert. What appears to be a shop window dummy could be a rival shopper with a claw hammer.

Shopper Emma Bradford said: “I wanted one of those electronic Furbys that gets pregnant. When I finally made it to the Furby aisle there was another mum carrying off the last one.

“I smiled apologetically then kneed her in the face, followed with a couple of kicks to ensure she stayed down. Who’s got the Furby now, bitch?

“Next on the list is toiletries but that department seems to be on fire.” 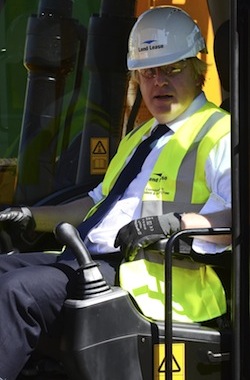 THE debate over social mobility was reignited last night thanks to an opinion from an economy-sized boy.

Boris Johnson, Londons six year-old mayor, said that stupid poor people are all stupid and poor, apart from the few that are surprisingly clever.

Boris said: “The poor clever ones should be allowed to be clever. But Ive counted and there are only seven of them, so all the clever schools will have enough room.

“The stupid ones will always be stupid and they should go to a thick school with dense teachers and write down all the wrong answers with idiot pencils.

Delivering the Margaret Thatcher Lecture at the Centre for Policy Studies, he added: “So, what I am saying is, all the rich people are clever and all the poor people are stupid.

“Apart from the seven poor people who are not stupid.

“My job is a clever job. I get to wear a lot of different helmets.”