EVERYTHING in Britain is to be run past a panel of scrunch-faced harridans.

In a bid to cut the costs of organising lengthy voter consultations and employing experts to work in policy think tanks, the coalition is simply going to do whatever the next rancid old ratbag tells them to.

The Cabinet Office’s plans to streamline Freedom of Information application requests will be the first policy to be scrutinised by half a dozen housewives from Carlisle to see if it benefits them Bulgarian gypsies in any way.

If successful, every future white paper will be subjected to the green biro of the panel’s wildly ill-informed comments.

Margaret Gerving, a 78 year-old headache, said: “If those young men think I’m going to stop poking them in the chest and looking disgusted until this country is exactly the way I want it to be then they have obviously not been reading my letters to the Carlisle Scrutiniser.

“I’m a member of every local tenant’s association and neighbourhood watch and I haven’t missed a council meeting in 30 years so I have the right to have my opinion rigorously adhered-to.”

Tory policy advisor Denys Finch Hatton said: “As a confused set of barely-concealed racists with scant grasp of fiscal policy, a general sense that somebody is getting away with something they shouldn’t and a profusion of liver spots, I think our backbenchers may have quite a lot in common with these ladies.

“Perhaps it’s time we changed the party logo from that dreadful green squiggle to a set of pursed, dry lips atop a tartan shopping bag containing own-brand cat food.”

Later this week, Ms Gerving will fly to Berlin to ask German chancellor Angela Merkel who she needs to speak to about the bins.

'I'm just a hack standing in front of a boy, asking him if he's taping me' 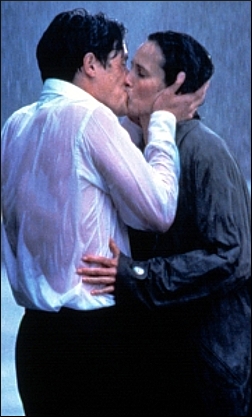 HUGH Grant is back on top of the Hollywood A-list after rave reviews for his new film The Englishman Who Went to a Pub With a Hidden Microphone.

Described as the ‘rom-com of the decade’ it sees Grant back in familiar territory as a slightly dopey, millionaire English actor who thinks newspapers should be used for promoting his films and publishing long, dreary features about his favourite ’causes’.

Grant, who plays the charming public school boy ‘Hugh’, has a chance encounter with a grubby hack in a lay-by in Kent but can’t stop thinking about him.

When he is offered the chance to meet him again he leaps at it knowing that if he tapes it he could finally redeem himself for using some of his vast wealth to encourage prostitution amongst working class black women.

Film critic, Julian Cook, said: “This film has everything. A rich cast of incredibly sleazy characters listening to the private conversations of vain, greedy people so they can provide some fleeting entertainment for semi-literate scum.

“It has twists and turns and a fascinating conspiracy involving powerful media executives expecting people to believe things that are wonderfully farcical.

”And it’s also full of those trademark Hugh Grant scenes that will have thirty-something women queuing round the block and then buying tabloid newspapers to find out who he is having sex with in real life.”

In one key scene, Grant summons the courage to ask the grubby hack the question he has always wanted to ask:

HUGH: Sorry.. look. Sorry, sorry. I just, ehm, well, this is a very stupid question, but I just wondered, by any chance, ehm, eh, I mean obviously not because I guess I’ve only slept with nine people including at least one prostitute, but-but I-I just wondered… ehh. I really feel, ehh, in short, to recap it slightly in a clearer version, eh, the words of David Cassidy, in fact, eh, while he was still with The Partridge Family, eh, “Did Rupert Murdoch know about this?” and eh, I-I just wondered by any chance you wouldn’t like to… Eh… Eh… No, no, no of course not… I’m an idiot, he’s not… Excellent, excellent, fantastic, eh, I was going say ‘lovely to see you’, sorry to disturb… Better get on…

PAUL McMULLAN: That was very romantic.

HUGH: Well, I thought it over a lot, you know, I wanted to get it just right.

PAUL McMULLAN: Fair enough, but to answer you’re question – I was about 840 pay grades below Rupert Murdoch, so you may as well ask me if Elvis knew about it.

In another heart-lifting scene Hugh tells the hack that he had finally realised what he wanted all along.

HUGH: There I was, standing in the office of the New Statesman and for the first time in my whole life I realised I totally and utterly wanted to secretly record one person. And it wasn’t my ex-girlfriend and New Statesman guest editor Jemima Khan. It’s the person standing opposite me now… in a pub.

PAUL McMULLAN: Is it still a pub? I hadn’t noticed.

The pair then realise that without each other they are nothing and kiss passionately to the strains of Sweet Little Mystery by Wet Wet Wet.