Angry motorist threatening to use mobile on forecourt

A CRAZED motorist is brandishing a mobile phone on a garage forecourt, it has emerged.

38-year-old sales manager Roy Hobbs has been cordoned off by the military as he threatens to press the green ‘call’ button on his iPhone, which would trigger the vague but dreadful Thing That Happens When You Use Your Phone at a Garage.

Marksmen are in place on the roof of a nearby Toys ‘R’ Us, with instructions to shoot the father-of-two in the head if he moves to operate the phone.

Technologist Nikki Hollis said: “While it is not altogether clear why one must not use a mobile at a garage – no one has ever done it – we are fairly sure the result involves a crater, possibly also massive carnivorous slug things issuing from the bowels of the earth, like in the evergreen Kevin Bacon film Tremors.

“Texting is fine though, it’s just voice calls that are the problem.”

Hobbs shouted: “I’m just an ordinary man who’s had enough. Don’t think I won’t do this.

“In case my kids are watching this on television, daddy loves you and one day you’ll understand.”

He added: “I just want some petrol and a disappointing savoury pastry, that’s all. Those twin pedestals on which this nation stands.

“Although while we’re on the subject, how can the staff at this garage claim they ‘don’t have a toilet’? Presumably they shit in some bushes, like badgers.” 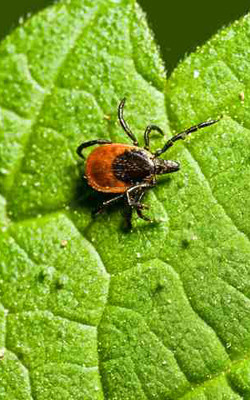 THE majority of ticks have a poor self-image, it has been claimed.

Research by the Institute for Studies found that 83% of ticks feel they ‘should be doing something more positive’.

Tick Tom Logan said: “When you’ve just fallen off a dog’s ear and are rolling around on the floor, delirious with warm canine blood, that’s when a nagging sense of doubt creeps in.

“It’s like there’s two sides to me – one is sensitive, intellectual, refined – the other just wants to put its hypostome under a mammal’s epidermis and start sucking until I’m spherical.

“But everyone’s got to eat. The problem is moderation.”

Black-legged deer tick Emma Bradford said: “There’s always this voice in the back of your head, going ‘blood, blood, get blood. Then get some more blood.’

“That’s what it is to be a tick. And you know what? There’s nothing wrong with that.

“Yes there have been some issues with Lyme Disease but on the flipside we provide food for birds that are nice to look at. As a tick you deserve your place in the ecology and don’t let people put you down.

“My message to other ticks is play Nothing’s Gonna Stop Us by Starship every day, first thing in the morning. Then go out with your head high and find a bulgy vein on a cat.”