A MAN who will spend the entire summer mistaking the contemptuous stares of strangers for admiration has already got his diabolo out, it has emerged.

Part-time barista Nathan Muir, 26, has taken advantage of the warmer weather and started spending his afternoons annoying everyone in his local park much earlier than usual.

Muir commented: “I like to put some loud reggae on my phone and play with my diabolo. The office workers on their lunch breaks love it because it shows them that there’s life outside of spreadsheets and emails.

“I catch them looking at me and I can see they’re wishing they could shrug off the shackles of their jobs and have the freedom that I do to just play.

“Sometimes I ask them if they want a go and they get really cross. But I know they’re cross with themselves because they’re so cowed by The Man that they can’t loosen up and join me.”

Credit control clerk Tom Logan commented: “He ruins every lunchtime slinging that thing around. If it lands on my sandwich again I’m going to punch him in the throat.” 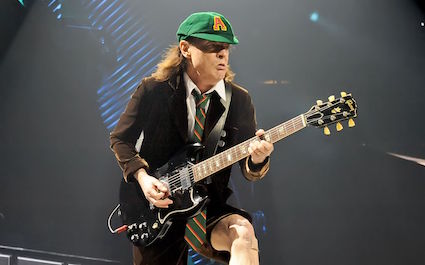 A LONE member of Australian rockers AC/DC has been mysteriously untouched by the ravages of time.

Fans are increasingly suspicious that lead guitarist Angus Young, aged 13, may owe his youth to some kind of diabolical bargain.

Lifelong AC/DC devotee Norman Steele said: “The rest of the band have succumbed to the rigours of old age and rock’n’roll.

“What is his secret? Has he cursed his bandmates?

“Or is he leeching youth from the audience even as he fools them into thinking they still look decent in black leather jackets and tour T-shirts?”

Angus said: “Yeah, I made a deal with the devil, obviously. I’ve written like thirty songs about it.”