Anyone who calls themselves a 'bad boy' actually just a prick

SCIENTISTS have confirmed that anyone who refers to themselves as ‘a bit of a bad boy’ is a prick.

Research from the Institute of Studies found that everyone from Judas Iscariot to Bobby Brown might come across as kinda cool for the first few minutes before you quickly realise they are absolute bellends.

Steroidal TOWIE-type twat Stephen Malley said: “Oh, I used to be a bit of a bad boy myself.

“Setting fire to bins, doing minor vehicle crime and generally making a nuisance of myself to normal hard working people.

“The kinda shit the bitches love. I’m also quite misogynistic, which is another cool bad boy trait.”

“This is because the kind of stuff they do is what bad children would do if they were in an adult body.”

Malley added: “Nowadays I’d say I’m less of a bad boy and more of a player. Basically that means I hit people, leer over woman and have an unhealthily close relationship with my mother.” 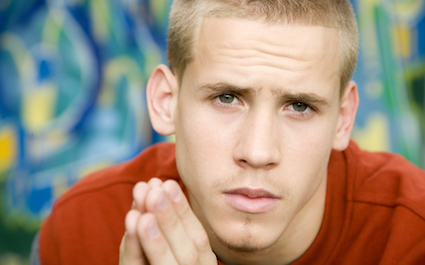 A TEENAGER back from the Labour conference has begun implementing Jeremy Corbyn’s vision of a new society at his parents’ house.

Momentum member Tom Logan, 18, has decided the Didcot semi-detached should be run on radical socialist principles and not for the benefit of capitalist elites like his mum and dad.

Logan said: “The big TV in the lounge will be taken into public ownership so the establishment can’t hog it when Strictly is on. I believe in TV for the many, not the few.

“Bedrooms should be distributed based on need, not colonialist right-of-domain, and I need the big bedroom so I can turn it into the community activism hub the street is crying out for.

“But the biggest reform will be redistribution of wealth. It is simply not acceptable for Dad to earn £65,000 while I get £28.25 a week at the garden centre.

“I propose to share his income equally among the family. My seven-year-old sister has already given her full backing to the policy, saying she intends to ‘buy all the ponies’.”

Logan’s mum Sandra said: “Tom keeps wanting to have long family meetings where we vote on everything. It’s unbearably dull, but he says it’s ‘vibrant grassroots democracy in action’.

“Also he keeps calling me a Blairite, when actually I voted for William Hague.”