AN OBNOXIOUS cafe worker’s band is thankfully really shit, it has emerged.

Wayne Hayes, who has the air of someone who has achieved a lot due to knowing how to make hot drinks and having a bunch of stars tattooed on him somewhere, recently played with his dreadful band to an audience including several customers.

Gig-goer Nathan Muir said” “When I saw it was him playing in the band I just thought, ‘Please God let them be shit.’

“And what do you know, God answered my prayers and they were total dog shit.

Everyone pretending to be cool with unexpectedly expensive restaurant 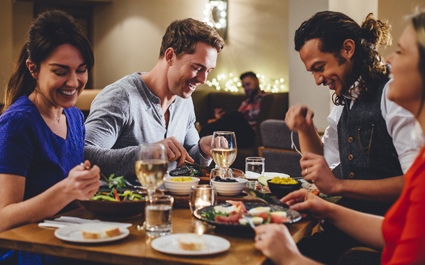 A GROUP of diners are pretending to be unfazed by the discovery that they are at an incredibly expensive restaurant.

Three of the party of four have put on their best poker faces while perusing the menu, despite the horrifying realisation that the evening will cost several days’ wages.

Diner Julian Cook said: “Five pounds for a basket of bread? And 18 quid for some prawns? Is this in another currency or something?

“Who chose this place? Oh, of course it was Becky, with her bloody City job.

“So we’re all pawns in Becky’s game of showing off. Now I’m looking at the wine list with a heavy heart while she’s secretly judging me, the rich cow.”

Conversation at the table has become strained as members of the group mentally calculate how they will economise to balance the exorbitant cost of the meal.

Fellow diner Nikki Hollis added: “I’ll be eating soup and bread for the rest of the month, then. Cheers Becky, for my temporary prison inmate lifestyle.”

Meanwhile, Becky is looking forward to taking the group to a charming little cocktail place around the corner later, which she will describe as “a bit pricey, but so much fun”.