Aspirational Facebook photos must be posted with equally unhappy image

EVERY aspirational Facebook photo must be posted with an equally miserable picture, under new social media guidelines.

A Facebook spokesman: “It’s quite simple – to post an ‘upbeat’, showing-off type image you need to simultaneously upload a picture of yourself in a state of loneliness or despair.

“For example, if you want people to see you at a festival in the ‘VIP area’ with models, you would need to also add an unhappy photo, for example you lying on a pub toilet floor crying with your trousers half-down.

“Or queuing to buy some thrush cream from Boots, or being mocked in a work meeting for saying something really idiotic. That sort of thing.

“Also pictures of food should be accompanied by pictures of the resulting bowel movement.”

Facebook user Nikki Hollis said: “I’ve just been on holiday somewhere nice and I really want to show off about it. But the Facebook moderators are saying I’ve got to also add a picture of me putting my hand in dog shit.

“Is the ego boost worth the public humiliation? Am I that desperate for attention?

Completed 'bridge to nowhere' just goes to other part of Glasgow 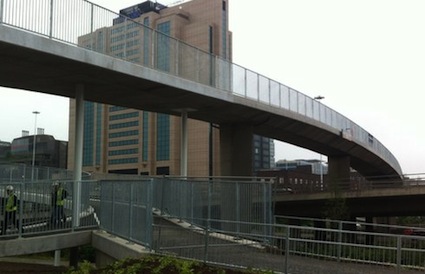 RESIDENTS of Glasgow are disappointed that the newly finished ‘bridge to nowhere’ does not lead to an escape hatch from the godforsaken Scottish hellhole.

The bridge was started more than 30 years ago and then abandoned in line with most other 1970s architecture.

Locals had urged officials to complete the bridge using a wormhole in space-time that would transport bold adventurers to somewhere with less knife crime.

Glaswegian Bill McKay said: “That’s just more Glasgow over there. Why would you make it easier for me to do that?”