A SIX-YEAR-OLD is being read the Old Testament as a fairy story by her proudly atheist father.

Eleanor Cook , who wanted something about princesses and dragons, is now halfway through Leviticus with another 36 books to go.

Her father Julian Cook said: “She asked for a fairy story, but they reinforce negative stereotypes about female lack of agency and I’ve told her she wants to be an architect.

“Then it hit me – the ultimate fairy tale is the Bible, good only for the entertainment of tired, credulous children.

“I read it all in a sardonic voice to underline how ridiculous it all is, and after each chapter we discuss all the scientific implausibilities and have a good laugh at them.”

Eleanor said: “I liked the bit with the animals on the ark and all the plagues that the Egyptians get for being bad to Moses.

“When I’m older I might join a club where we talk about the stories and how great they are, and maybe draw some pictures.

“Daddy says it’s important that I don’t grow up believing in an idealised, omnipotent father figure who can fix everything if you just ask. 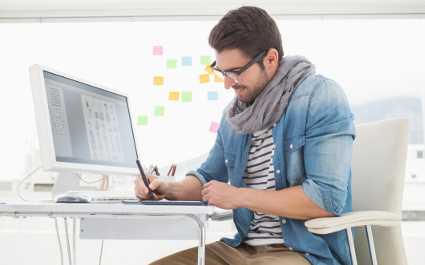 AN office poser has taken to wearing a scarf throughout the working day, not just when outside.

Graphic designer Julian Cook removed his coat, hat and gloves when entering the office, but left his grey cashmere scarf draped around his neck as if it was necessary to protect him from chills.

Co-worker Carolyn Ryan said: “Nobody mentioned it until half-eleven, then Rina the intern blew the whole thing by asking him if he knew he’d forgotten to take his scarf off.

“He rolled out this pre-prepared speech about it being perfectly acceptable to wear a scarf indoors as a winter accessory and that ‘David Gandy does it’.

“It’s been tremendously harmful to productivity, because we’re all just sitting here staring at, and loathing, that scarf.

“He’s a very good designer, but it would be worth firing him.”