Attempt to befriend office loner reveals why he is a loner

A GOOD-HEARTED attempted to befriend a widely ignored co-worker has backfired, it has emerged.

Administrator Nikki Hollis had assumed Martin Bishop was socially isolated due to workplace cliques or shyness, but soon discovered it is because he is a creepy twat.

Hollis said: “When I invited Martin to lunch he immediately started hassling me to invite Lorna, who neither of us really know and which would have been weird.

“In the canteen it turned out his idea of conversation is telling you the plots of obscure horror films. Apparently I should see one called Blood Martyrs because a man gets his tendons ripped out with fish hooks.

“I changed the topic to harmless office chat, which Martin took as a cue to speculate about which female colleagues were ‘rightslags’. Also I have never seen an adult pick their nose while eating.

“He believes Britain is run by ‘high-ranking gays’ and we need a strong leader like Putin. I’m just praying it was a joke when he said he’d get my address off the internet and bring his Samurai armour to show me.”

Bishop said: “Since we’re best friends now I left some of my favourite SS history books on her desk for her to borrow.” 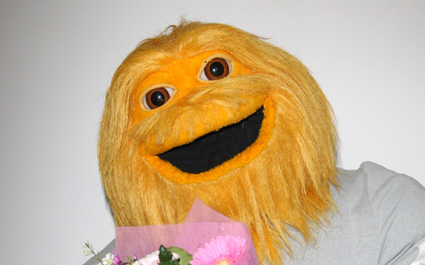 THE monster formerly known as ‘Honey Monster’ has changed his name after beating his sugar addiction.

After 40 years blighted by bouts of heavy honey consumption, ‘Monster’ has dropped the word ‘Honey’ from his name to signify a new start.

He said: “Honey nearly killed me, it made me a bad person. That monster is gone now. I’m a different, less bloated monster.

“I have a whole new friendship group that isn’t into sugary things. They’re more spiritual and they love me for who I am.

“I know I can’t be around sugary cereal, even a single Cheerio could set me off, but that’s okay because now I do yoga and meditation at breakfast time.”

Monster added: “We all saw what happened to Coco the Coco Pops monkey, by the end he was pulling tricks by the side of the road for a bowl of the good stuff.

“Snap, Crackle and Pop are all in rehab and don’t get me started on Tony the Tiger and what happened in that Travelodge, he’s not even eligible for parole until 2020.”