OH shit, there’s a fucking bee in here, it was confirmed last night.

The presence of a bee emerged shortly after the volume was turned down amid complaints of a faint buzzing sound coming from somewhere.

Moments later the potentially lethal intruder was spotted bumping its head gently against the living room window before retreating, performing a tight loop and then starting all over again.

But as beeologists stressed it was just a bumble bee, which is actually rather cute and furry and essential to the production of food, everyone told them to shut the fuck up or get the hell out of the way.

Tom Logan, a part time anti-bee activist, said: “Nobody move a muscle while I use this fish slice to coax it towards the window.

Mr Logan then fled to the kitchen, re-emerging 20 minutes later with an even bigger fish slice, a garlic press and wet towel draped over his head.

Meanwhile Helen Archer, a potential bee victim, insisted: “It’s okay… it’s okay. Bees only attack you if you attack them. Or is it the other way round? Oh my God, I can’t remember.”

Professor Henry Brubaker, of the Institute for Studies, said: “Like their relatives the honey bees, bumblebees feed on nectar and gather pollen to feed their young. They do not have ears.”

But Anne Logan, a part-time assistant anti-bee activist, said: “Fuck that shit. I’m probably allergic to bees according to an article I saw in Woman’s Head.”

As Mrs Logan went on-line to search for bomb-making instructions, Mr Logan screamed ‘ALL IS LOST’ before dowsing himself in petrol, setting himself alight and hurling his flaming body at the bee which slipped quietly out of the window and had a quick look round before settling on a lovely daffodil. 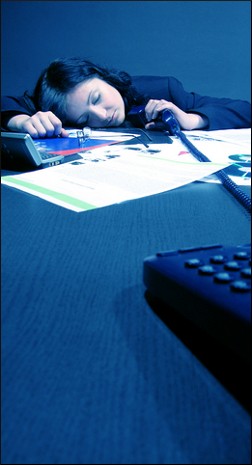 THE soaring number of office workers who choose to die at their desks is costing the UK economy Â£2.6bn a year, according to a new report.

Professor Henry Brubaker said: “Almost a quarter of office workers have had to cover for someone who has ceased to exist during office hours. Without clear guidelines we risk falling even further behind the Chinese who would not think twice about feasting on a dead colleague. Or a live one.”

Martin Bishop, a business consultant from Peterborough, was half way through an important client meeting last month when one of his co-workers decided to die.

He said: “At first I tried sneakily booting his shins under the desk to try and stop him going towards the light. Then, as everyone was shaking hands at the end I punched him five or six times in the chest as hard as I could. Everyone just went silent and stared at me.”

He added: “The clients left without saying a word, and I haven’t spoken to my colleague since. In fact, I think he’s still sat there but I’m not phoning an ambulance until I get some kind of apology.”

Kevin Reese, a call centre manager from Hatfield, said: “If you’re going to die at work make sure someone on your team knows about it in advance and for goodness sake don’t slink off to the toilets where your putrefying remains won’t be discovered until the height of summer.

“If I have to drag your pus-filled corpse into the lobby in the middle of a 30 degree heat wave, you can ask someone else for a reference.”