A SECRET list of BNP members has revealed the party includes people from a range of professions, not just the police.

According to the list, published on the internet, British National Party supporters now include doctors, vicars, teachers, sports commentators and children's clowns.

The party, founded in 1982 as a book club for metropolitan police constables, soon expanded to include senior officers up to the rank of superintendent, as well as a growing number of angry retired policeman.

Among the party's new members is ITV football commentator Roy Hobbs, known for his refusal to pronounce foreign surnames, and the Right Reverend Julian Cook, author of bestselling book Was Jesus from Dorset?

Professor Logan added: "My neighbour's a retired policeman. He keeps telling me that it used to be nice round here but now everything smells of ghee."

A spokesman for the British Medical Association said: "A good way to determine if your doctor is in the BNP is if he tells you to open your mouth, say 'aaah' and then asks if you've been in contact with any Jews recently.

"He may also want to measure the diameter of your skull and the width of your nose before recommending you for sterilisation."

The British Dental Association insisted its membership has been Nazi-free since 2005. 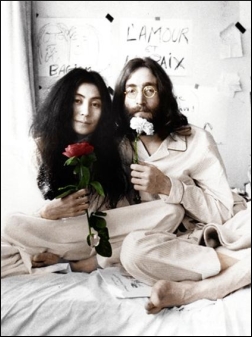 SIR Paul McCartney last night revealed the Beatles were churning out drug induced bollocks at least 18 months before John Lennon got together with Yoko Ono.

Confirming the existence of the improvised track Carnival of Light, Sir Paul said it was inspired by the modernist composers John Cage and Karlheinz Stockhausen, as well as a Tupperware box filled with 'grade-A Jamaican bongo'.

"It's basically 14 minutes of John hitting Ringo with a soup ladle. He managed to produce this lovely warm tone by striking him directly on the top of his head.

"We then mixed it with George chanting a refrain about some fat bird that used to work in a cake shop near the Liver Building. It's really an early version of Pipes of Peace."

The song was recorded at Abbey Road in 1967, but was soon confiscated by prime minister Harold Wilson who would wake up Tory firebrand Enoch Powell in the middle of the night and play it to him down the phone.

Sir Paul said the Beatles performed the song live just once, at a festival in Barcelona, when John Lennon introduced it while doing his tiresome impersonation of Carry On star Sid James.