THE discovery of a gene that could cause obesity has caused lazy bastards to demand a DNA-based excuse.

Idle person Julian Cook said: “If overweight people have a genetic get-out clause, lazy people should have one too.

“Surely there must be a scientific reason why I am so fascinated by the sofa and Sky+.”

However Professor Henry Brubaker said: “It’s possible that laziness evolved as a survival strategy, because those who stayed in the cave looking at the paintings were less likely to be killed by bears.

“But there aren’t any bears now, so get off your fat arse.”

Panda 'had cubs just to get more zoo handouts' 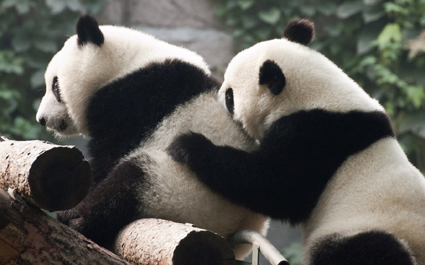 GIANT panda Lun Lun has been accused of exploiting the zoo welfare system after having two cubs in captivity.

Following the birth of twin cubs at a zoo in Atlanta, Republican Tom Logan said: “That’s more bamboo coming straight out of the taxpayer’s pocket.

“I wonder if Lun Lun would have been so fertile in the wild, where no-one’s going to give her a free enclosure with nice foliage and a water feature.

“And I’d like to know where the father is in all this. Probably disappeared back into the mists of some distant jungle to get some other pandas pregnant, I imagine.”