THE wait at Heathrow’s border control is now so long that many become full UK citizens while queueing.

The queues, which make up 72 per cent of the population of the London borough of Hillingdon, have been found to provide all the necessary conditions for a UK passport.

During the five-­year wait prospective entrants have learned English, proved themselves to be of good character by not pushing in, and quite possibly have had children on British soil.

Many have also shown a willingness to sustain themselves economically by getting jobs in WH Smith, Tie Rack, and have assimilated British culture by raising whole families on Greggs steak bakes.

Even those who do not qualify for citizenship are being admitted to the country by UK Border Agency staff who vouch for them personally.

Immigration officer Joseph Turner said: When Ardjan turned out to have a string of convictions for people trafficking and murder in Albania, it hit me hard.

Wed spent the last three years practically as neighbours and grown very close. I know this man and his six attractive sisters will be an asset to the country, so I allowed them to make their own passports out of cardboard.

Immigration Minister Damien Green said: What could be more British than waiting patiently in line for hour after hour, year after year, with only the faint prospect of anything worthwhile at the end of it?

These people deserve their citizenship and the UK Border Agency must be congratulated for providing yet another example of superb private sector efficiency. 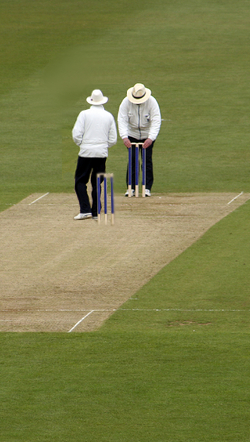 RECENT extreme weather proves that the Almighty sees cricket as a abomination, it has been claimed.

England has been permanently awash since the season started, and several grounds have been infested with beetles bearing the face of Richie Benaud, leading cricket fundamentalists to believe that the end of cricketing days is upon us.

Cricket theologist Roy Hobbs said The portents foretold in Wisden have been occurring across the country, as Headingley is now an enormous swirling vortex of water with a kraken patrolling its depths and Old Trafford is being haunted by a legion of howling daemons.

It is in Manchester though, so, y’know.”

The stationary pastime has been condemned as an abomination against the Lord for decades, with sporting preachers warning that He did not breathe creation into an entire universe just so people could watch a patch of grass for five days in a row.

The last month of rain is now being seen as Gods final attempt to scour cricket from the face of England after His previous efforts, including the 2006-2007 Ashes series in Australia, proved unsuccessful.

Theologists believe that once cricket has been destroyed the grounds will remain forbidden areas, in case somebody picks up a bit of wood and ponders whether standing around with it for eight hours might make an interesting hobby.

Hobbs said: A bearded man in a robe was recently seen near The Oval rounding up two of every kind of bowler and batsmen, which we can only take as a bad sign.

He made it absolutely clear he didnt need any English ones, though. He was almost pedantically specific about that.