Boyfriend bears no relation to description of him

A WOMAN’S latest boyfriend does not match the glowing description she gave to friends, it has emerged.

During a trip to the pub, Emma Bradford’s new partner Tom Logan fell short of expectations in numerous areas including sense of humour, interests and height.

Friend Wayne Hayes said: “Emma definitely described Tom as tall and good-looking, so I didn’t recognise him when a guy started to talking to me who looks like he’s into Satanism and graphic novels about giant robots.

“He wasn’t that tall either – maybe a bit above average but not properly tall or a bigfoot.

“The biggest disappointment was that Emma said Tom was really funny, but the only vaguely humorous thing he said was ‘British weather, eh?’.

“He’s nice enough but definitely not as great as Emma’s imaginary, ego-boosting version.”

Friend Nikki Hollis said: “Tom isn’t interested in films, books or politics, but he does like listening to cricket on the radio. That does not fit any accepted definition of ‘really interesting guy’.”

Bradford said: “Tom’s really different when he’s with me…who am I kidding? Looks like it’s the old heave-ho and back to Match.com again.”

Gerbil only goes and f**king eats other gerbil 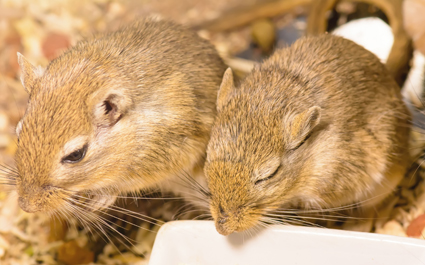 A BELOVED pet gerbil has only gone and f**king eaten his mate.

The gerbils, known as Ant and Dec, were owned by 12-year-old Nikki Hollis who found Dec eating Ant this morning which resulted in her screaming for about four hours straight.

Hollis’s father Martin said: “We’ve never had gerbils before so how were we supposed to know they do this kind of thing?

“We’d got them a small plastic wheel and everything, which should be been more than enough to keep any cage-confined mammal mentally stable.”

He added: “We were going to get Nikki a dog instead of the gerbils but we thought it would have ended up being quite expensive.

“We now realise it’s going to cost a lot more paying for her years of therapy.”

However gerbil Dec said: “We were having some banter and the next thing I knew I was eating him.