Bristol to be reclassified as London suburb

BRISTOL is so overrun by ‘relocating’ London twats that it might as well just be in London, it has been confirmed.

Thousands are selling their houses in the capital and moving to Bristol, despite the fact that previous influxes of Londoners have already ruined it by opening overpriced vegan milkshake bars.

Former London resident Nathan Muir said: “Bristol is really similar to Hackney, but how Hackney used to be in the old days, before people like me moved there and made it an incredibly annoying place to be.

“You can pretend Bristol is a bit scary and edgy because there’s loads of graffiti everywhere, whilst being reassured that it’s the middle class kind that is making a gently humorous point about social injustices.

“I did think I’d get an extra bedroom for my money. Instead I’ve got a hippy on ketamine living in my garden shed, but at least it’s a slice of authentic Bristol life.”

A government spokesman said: “Bristol is so much like London that we’re just going to pretend it’s attached to Peckham and start calling it Brondon.

“Eventually the whole M4 corridor will be full of London bastards, except for Reading and Swindon which will be paved over for a massive park and ride scheme. Some places just can’t be gentrified.”

Selfish nurses quitting to kick back and enjoy their massive wealth 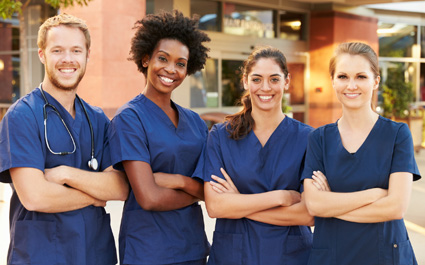 NURSES are leaving the NHS in record numbers because they are already minted, it has emerged.

Despite claiming to receive increasingly shitty pay from the government for doing some of the hardest work imaginable, the average nurse’s starting salary is in fact £1,200,005 per year excluding overtime and a free sports car.

Midwife Linda Thompson has spent 20 years bringing thousands of lives into the world, but has decided to quit the profession to enjoy her riches.

She explained: “I live like a rapper when I’m off duty. It’s champagne and shit-hot toyboys all the way. If you don’t already have a Porsche 911, I would highly recommend it.

“My leaving is nothing to do with the wanton destruction of the NHS and betrayal of everything it was created for. It’s just time for me to chill.

“I’ll be on my private island if you need me.”

Mental health nurse Wayne Hayes, who has spent years helping the most vulnerable in society, is also planning to make the most of his fortune before deciding on his next move.