Britain As Insanely Violent As You Thought It Was

BRITAIN is every bit as violent and terrifying as you thought it was, the government confirmed last night.

Home secretary Jacqui Smith said the police must take full responsibility for misinterpreting government guidelines in exactly the way she told them to.

Home Office officials admitted that since 1997 gun crime had been defined as 'offences involving Howitzers and other heavy artillery', while the majority of knife incidents had been dismissed as 'pirate fun'.

But Smith insisted it was very easy to interpret a 22% rise in violent crime as a 15% fall, especially if you were willing to lie about it.

Members of the public welcomed the revised figures saying it helped to explain why they kept coming home from work covered in blood.

Roy Hobbs, an accountant from Ashford, said: "Every time the government said violent crime was going down I thought 'well, if that's the case then why do I, my wife and many of our close friends have a knife sticking out of our chest?'.

"That said, this year I have noticed a slight reduction in the number of bodies I have to step over on my way to the station."

Meanwhile local authorities have reported an increase in the use of noise abatement orders to deal with complaints about chainsaws and desperate, horrifying screams.

Children To Be Taught Why Women Are Out Of Their Minds 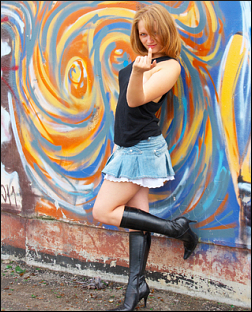 SCHOOLCHILDREN across England are to get compulsory lessons on why women are insane.

Ministers want to make sex and relationship lessons compulsory so future generations of boys do not waste half their lives trying to work out what the hell that was all about.

A spokesman said: "Most of the early classes will focus on teaching boys how to let it all wash over them.

"Meanwhile the girls will be taught the importance of establishing confidence and stability in a relationship before suddenly changing their minds."

Lessons on the biology of sex will also be overhauled with new diagrams showing the male body as a digestive system attached to a disappointingly small penis.