The rocketing popularity of noseless barrel-chested dogs has fuelled demand for even more distinctively nightmarish pets.

French bulldog owner Emma Bradford said: As much as I love having a pet that looks like an insects head welded onto the body of a monkey, I would prefer something even more fucked up.

Perhaps a breeder could create a dog with nine eyes on its arse and claws instead of paws. They could call it a crabrador.

I think it would have a lot of charm and character.

Stephen Malley owns one of those pedigree dogs with baggy flesh that hangs off its body in loose, scrotum-like folds.

He said: The shar-pei is an odd enough beast but I really want something that will make people in the park physically sick with terror.

Perhaps a snake-dog  a pulsing tube of scaly muscle with a cute spaniel head. Please make me one of those.

I will let it sleep on my bed, and kiss it on the mouth. 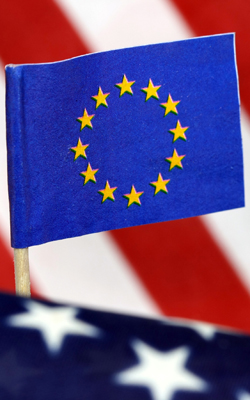 PUBLIC support for the European Union peaks when it is lording it over the USA, it has emerged.

America must kiss our starry ring

As Europe sealed a third consecutive Ryder Cup win over America, Britain decided the EU was a fine institution that deserved nothing but support and respect from everyone in the country.

Stephen Malley, from Gravesend, said: “We have our differences with our cousins across the Channel, but we have so much more in common, such as an innate sense of superiority over those strutting, bombastic, irony-hating Yanks.

“After spending three days watching Phil Mickelson’s stupid face, I now feel incredibly proud to be European. I’ve completely changed my mind on the Common Agricultural Policy, and all I can talk about is how Disneyland Paris is so much better than Disney World Florida.”

Donna Sheridan, from Edinburgh, said: “When I saw Ian Poulter doing a victory dance, I suddenly wanted to wrap myself in a blue flag, eat some smelly cheeses, and sing the EU national anthem, whatever it is.

“Tom Watson can shove a bald eagle up his arse. How’s that for manifest destiny?”

Britain added that the common market, freedom of movement and sixty years of peace and prosperity were ultimately far less important than getting one over on men named Bubba.

“Can you hear me, Jennifer Lawrence? Your boys took a hell of a beating.”